No time for jibber jabber today.  Let's just jump right into the links!

- On Monday, el duque of It Is High... listed his top 10 Yankee prospects and went pretty off the board with his top two selections.

- William Juliano of The Captain's Blog investigated the pros and cons of the new Ticketmaster deal, and what the effects would be for buyers and sellers.

- On Tuesday, Matt Imbrogno of TYA took the lineup building idea a step further than I did by constructing two optimal batting orders based on CAIRO projections.

- Robert Casey of Bleeding Yankee Blue interviewed SS prospect Cito Culver.  I wish Robert would have asked him when he's planning on dropping the switch-hitting thing, but that's probably why I don't do interviews.

- On Wednesday, Jason Cohen of Pinstriped Bible dug deeper into Joe's "finding new ways to score" statement to point out that this year's team will not be completely powerless.

- Mike Axisa of RAB reviewed the Yankees' collection of 2012 international signings.  At first glance, there aren't any players who stand out like a Gary Sanchez, but there is potential there.

- Egon Spengler of NoMaas played with past and present projections for Jeter, A-Rod, and Ichiro to set a basis for expectations in 2013.

- Derek Albin of Pinstripe Pundits compared the projections for the 2013 offense to last year to see just how big the potential drop-off could be.

- On Thursday, Lisa Swan of Subway Squawkers commented on the Yankee front office's continued battle against StubHub and the stupidity of their choice to make that a major offseason focus.

- Chad Jennings of LoHud had the latest on Michael Pineda's rehab, which sounds like it's going very well, and some comments from coaches on his progress.

- Kate Conroy of Lady Loves Pinstripes wasn't drinking the Joe Girardi Kool-Aid when it came to the 95 wins declaration.

- Hunter Farman of Yanks Go Yard said the utility infielder job is Corban Joseph's to lose this spring.  I don't know if I would go that far, but he certainly has an opportunity.

- On Friday, Stacey Gotsulias of IIATMS set everybody straight on the comments Kevin Youkilis made about "always being a Red Sock."  Stacey is running the show over there now, so make sure you've got IIATMS in your regular blogosphere rotation if it isn't already.

- Daniel Burch of The Greedy Pinstripes kept the prospect interview train chugging by having his own Q&A with Corey Black.

This week's Friday Jam is "War Machine" by BRMC because well, why the hell not?

Yanks Still In The Market For Pitching Depth, Eyeing An Old Friend

Along with signing cheap veteran players to fill bench results, a Yankee staple the past few seasons has been stashing a cheap veteran starter or two in the Minors for emergency pitching depth.  Last year it was Ramon Ortiz and John Maine who filled that role, and filled it admirably, but so far this offseason there hasn't been a single signing of that type.

Enter this little nugget of intel from The Post's George King about the Yankees monitoring the status of Chien-Ming Wang, who threw for Billy Connors recently in a quasi-audition.  According to King, the Yankees haven't reached out to Wang or his agent, but they will be scouting him when he pitches for Taiwan in the WBC.  Wang has never been the same since injuring his foot in Houston in 2008, and was downright awful last season in Washington (6.68/5.85/5.43 in 32.1 IP).  He wouldn't be in the running for a Major League call up, as those will most likely be given to Adam Warren and Brett Marshall, but he could serve as backup depth in Triple-A should one of those younger arms be needed in the Majors.
Posted by Unknown at 1:28 PM No comments: 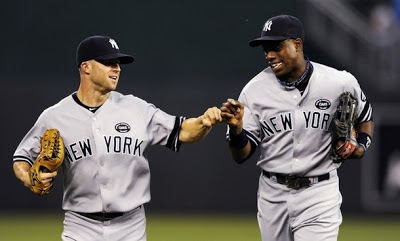