Yanks-Halos ALCS Preview In a Nutshell 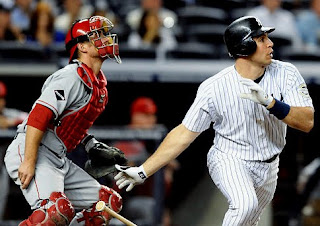 I'm not going to waste time breaking down all the matchups and running through the list of each team's strengths and weaknesses here, because quite frankly it's boring and every other Yankee blog and sports website has already done it.  And quite johnly, I don't think any of that shit matters.  These 2 teams are practically even in every facet of the game, and if they aren't then the advantage held by one over the other is so small that it shouldn't tip the scales one way or the other.  Every facet of the game except one.  That one facet is the bullpen.

It's no secret by now that the Yankees bullpen is stocked with competent, confident power arms that can be used interchangeably with frighteningly consistent and dominant results.  Phil Hughes was as awful as he's been all season against the Twins and he still managed to get some outs and not blow any leads and logic would dictate that he's spent the better part of the off time this week reviewing his performance and realizing he needs to stick with the fastball when he gets to 2 strikes and not overthink the situation and get cute with his off-speed stuff.  Outside of Hughes and Damaso Marte, who barely qualifies as a pitcher, the Yankees' pen was lights out in the Division Series and gives them the luxury of keeping their starters on a shorter leash in the unlikely event they suck ass on the mound.  The Yankees can theoretically shorten the game down to 5 innings and still feel confident about holding slim leads, something that has been proven time and time again to be a major luxury in the playoffs.

It's also no secret that the Angels bullpen has been shakier than Muhammad Ali's handwriting over the course of the regular season and hasn't looked all that strong so far in the playoffs.  While the Yankees throw out the fearsome fivesome of Rivera, Hughes, Joba, Aceves, and Robertson, with Phil Coke on drums, the Angels counter with Jason Bulger, Matt Palmer, Kevin Jepsen, and Darren Oliver as their rickety old bridge to the left-handed human roulette wheel that is Brian Fuentes.  If the Angels don't get starting pitching at least as good as what they got against the Red Sox then they are going to be in big trouble in late innings against a Yankee offense that has already demonstrated they have no issues performing a coup de grace against subpar relief pitching.

People can talk about stolen bases, switch hitting, 3-man rotations, how Mike Scioscia is the world's greatest genius, and schedule changes due to weather all they want, but the thing that's going to determine the winner of the series is going to be the bullpen.  Whichever team can hold the late-game leads that should be a constant theme of this series is going to win and the team that is set up better to hold said leads is the Yankees.  Period.  End of story.

I rest my case.  Somebody hit the music...