The Only Thing That Mattered In The Hughes Outing Today

I gave him a little crap earlier on the AB4AR Page for his rough first outing of the season today, but really there was only one thing that mattered for Phil Hughes today and that was the number 93.  As in, his fastball regularly being clocked at 93 miles per hour.  The disaster that was his 2011 started off with him having nothing on his heater and never really finding it.  In 2012, he's coming out in his first start and hitting the mark on the gun where he needs to be to have success.  That's a damn good sign.
Posted by Unknown at 7:03 PM No comments:

Accelerating The Learning Curve With $189 Million

With Hal and Cash making the magic number of $189 million official last week, we now know without a doubt that the Yankees are going to make a concerted effort to get the payroll at or below that number by 2014.  It's an aggressive goal, but a worthy goal in the big picture, and it will certainly come with some casualties as it's already very clear that not everybody on the current roster can be retained while keeping the payroll below the $189 mil threshold.  That being the case, the Yankees are going to have to lean on their young players more in 2014 to help make this goal a reality, and not just as fodder to fill out the 40-man roster or as a placeholder while somebody else is on the DL.  The Yankees' goal every year, regardless of budget, is to win, and to do that while cutting payroll they are going to need some serious production from this current crop of high-level young players.  It's a drastically different approach than the one they've taken with their prospects recently, but one that will help define just how good this farm system is.

A hot topic of conversation before the number 189 became so important was the impressive crop of free agent starting pitchers that will be available after this season.  It seemed like the Yankees were well positioned to add one of these big names and make their days of shallow starting pitching depth a thing of the past.  With the amount of money that is going to be tied up in a handful of players, however, the likelihood of the Yankees adding a big name arm and still staying beneath the $189 million ceiling is incredibly low.  That void in the rotation will have to be filled from a more cost-friendly source, which means plans for guys like Manny Banuelos and Dellin Betances will likely change.  In a perfect world they would spend this entire season in Triple-A, working on refining their mechanics and building up their innings counts, then maybe get a September call up to work with and learn from the big leaguers, and come into the 2013 season with a chance to make the team as the 5th starter to lessen the pressure on them and ease them into their careers.  Now they might not get that luxury.

The reality of the situation is that the Yankees are only going to have three starters under contract in 2014 (CC, Pineda, Nova), and they'll need to get that remaining 40% of their starts from somewhere.  They can probably find a cheap starter somewhere on the market to eat innings, but to keep costs down they are going to need someone from the Minors to step in and pitch, and pitch well.  As the top dogs of the farm system, the pressure would be on Banuelos and Betances to produce in 2013 and show that they're capable of shouldering their share of the load.  The clock is ticking down to 2014, which means it's ticking down faster on Banuelos and Betances to improve as pitchers and be ready to contribute.  If you stop and think about it, that same logic can apply to Michael Pineda.  Cash and Joe can try their hardest to downplay the significance of where Pineda pitches in the rotation, but the fact of the matter is he was brought in to be a top-of-the-rotation starter and he's going to have to develop into that if the Yankees want to stay away from the free agent market and control costs.

Hey, Did You Hear About Michael Pineda Throwing a CHANGEUP Yesterday?!?! 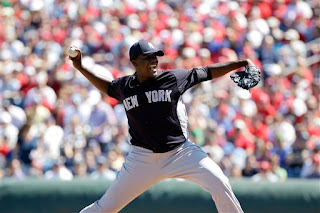 (Here it comes.  The heater.  I dare ya.  Courtesy of The AP)
Seriously, a changeup??  What is that?  Who's even heard of a pitch like that?  Pineda must be some kind of mystical wizard out there on the mound to be able to throw a pitch like that because EVERYBODY was talking about it.

“I think he’ll be fearless with it." - Larry Rothschild

"I’m not surprised because when I caught him in the pen, he had a good idea of it." - Russell Martin

“You like that attitude. You want a guy that’s willing to work at something and try to get better ... " - Joe Girardi

In all seriousness, yesterday was about as good a meaningless Spring Training debut as you could hope for from Pineda.  His fastball was mostly low-90s, not quite up to its usual heat level, but he threw it for strikes and got swings and misses with it.  He also threw his slider some, and he did throw the changeup a few times, getting a strikeout of Shane Victorino on it and getting another out with it.  Spring Training is the time to work on stuff and Pineda has been doing just that.  The more he throws the change and works it into a usable pitch, the more dangerous he's going to be once the regular season starts.

Quotes courtesy of Chad at LoHud