In case you missed it today, and shame on you if you did, there was a major change in the Yankee blogosphere.

Friend of AB4AR Larry Koestler and his team at Yankeeist have joined forces with Moshe Mandel and the crew at TYU to create the new blog The Yankee Analysts, a super-mega blog that will almost assuredly take over the world.

For me this is goods news because now it's one less internet tab I have to open up on my lunch break at work to get my daily dose of Yankee blog goodness.  For you it's good because now you can get the absolute best Yankee-related statistical analysis from the same source.  Even their tagline is good:

"Dedicated to thoughtful analysis of the New York Yankees"

Damn!  Why didn't I think of something that good?  Anyway, if you're one of the unlucky few who never checked out either of their original sites, do yourself a favor and get acquainted with the new one, and do it with the quickness.  Dudes are going to be spittin' hot fire on TYA for a while to come.
Posted by Unknown at 8:45 PM No comments: 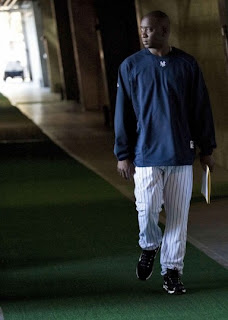 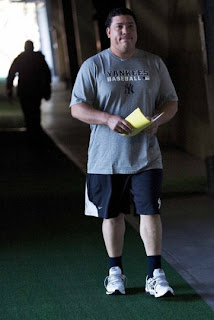 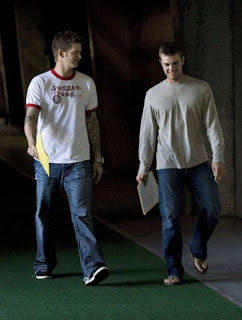 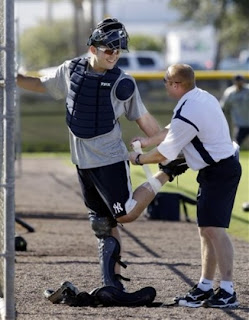 (All photos courtesy of Reuters)
Posted by Unknown at 4:10 PM No comments:

Late last week I touched on my topics of interest during P&C reporting/ST time.  In all likelihood, not a lot of those will receive significant coverage.  My fear is that some other stories, ones that either have nothing to do with on-the-field stuff or are ones that should never be discussed, are going to take up too much space in the blogosphere.  Here are some of those stories that I could not care less about.

This has already gotten more coverage than it deserves, with everybody trying to make "will he?" or "won't he?" arguments based on vague statements by CC.  Here's the deal, CC has never officially said whether he plans on opting out or whether he plans to not opt out, just that he wants to continue to play for the Yankees.  I think CC would be a fool to not opt out.  I mean, they got that clause into the contract so they could have the option to opt out and get more money if CC performed well, and he has certainly done that.  But that's AFTER this season, so I don't give a crap about it until AFTER the season.  For now, let's focus on what he's going to do on the field to help the team.

2) How much weight CC ACTUALLY lost

Late last week there was a bit of a stir when Cash stated that CC didn't look like he had lost 25-30 pounds in the offseason, as had been previously reported.  Just reading stories about that made me want to throw up.

I don't care if CC lost 5 pounds, 15 pounds, 25 pounds, or 50 pounds.  That's not the important thing.  The important thing is that he lost some weight and focused on getting in better shape to take stress off the knee on which he had offseason surgery.  This isn't "The Biggest Loser," people.  He doesn't get a prize for losing a certain amount.  The fact that he worked to lose some weight is the real issue, and any weight lost as a result of that is a positive.

I know there are a lot of pitchers in camp and they all need to be caught by somebody, but sweet Jesus, can somebody hide all of Jorge's catching gear or burn it or something?  The first time I read a story about him handling Betances in a bullpen session or see an AP photo of him making throws to 2nd, there's a good chance I book myself a flight down to Tampa to take the catching gear away myself.

Give it up, Jorge.  Your time behind the plate has come and gone.

IMHO there is still too much talk about how Joe carries himself around the team.  Some think he needs to loosen up, some think he needs to be like he was in 2009, some think this, and some think that.  Honestly, who really cares about his demeanor???  What bearing does it have on the team's success?  To a man, every player on the team has said they love playing for him.  They know Joe has their back and their best interests at heart at all times.

Lou Piniella was a complete asshole, but his players played hard for him.  Torre barely moved in the dugout and he won 4 titles.  The demeanor means nothing as long as the coach knows which buttons to push on which players behind the scenes and makes the right personnel decisions at the right times.  If Joe can do that this year and the team wins as a result, he can wear sad clown makeup in the dugout for all I care.

Yes, they are all badass.  Yes, they are all potentially ace-type pitchers.  Yes, I have a budding hard on for all of them.  But no, I do not want to see any of them in a Yankee uniform this season until the late summer/early fall, and only in an emergency bullpen situation.

These guys are the future of the pitching staff and there's no reason to push them right now, regardless of how shitty the rotation might turn out to be.  I don't care how good they look in Spring Training, I don't care who's raving about their stuff, I don't care if they strike out every guy they face in an outing.  They need to spend the year in the Minors, building up their arm strength, increasing their innings, and continuing to develop their secondary stuff.

We saw what happened when the Yankees rushed a prize prospect up too quick and ruined him (Joba).  And we saw what happened when they took it slow, let a kid mature and build up his skills before giving him a real shot at the rotation (Hughes).  If the organization wants success for the Bs, they need to follow the Hughes path, not the Joba one.
Posted by Unknown at 1:10 PM No comments:

Today is a Monday, which sucks.  Mondays always suck.  But there was something a little different in the air this morning when I woke up.  For once I didn't lay in bed hitting the snooze button every 10 minutes until I absolutely had to get out of bed or risk being late to work, cursing my stupid job for interrupting what could have been a wonderful time in bed until noon.  For once I didn't stare blankly into the bathroom mirror while I waited for the shower to heat up.  For once, I actually got out of bed and got ready to go to work early enough to allow myself some time to actually eat breakfast.  And for once, I wasn't overcome with the urge to bash the first person I saw in the face with my keyboard as soon as I walked into the office.  What could be causing this sudden change of heart, you ask?

The thrill of victory or agony of defeat has worn off from the Super Bowl, college football has long sense been over for the season, college basketball's time to be at the forefront is still too far away, and nobody really gives a crap about the NBA or NHL, so this day officially signifies that it's baseball season.  Across the various team facilities there will be the sound of gloves popping, the image of players jogging across the field, and the feeling of optimism that every fan is allowed on this first day of "real" baseball activity in 2011.

Cliff Lee is ancient history.  Andy Pettitte is yesterday's news.  All that matters right now are the players that are here and the guys who are going to show up today to start working on winning the 28th World Series title in Yankee team history.

It's baseball season again, kids.  It's a good day.  It's time to hit the music.

P.S.- Can somebody please update the videos for this song with players from the last couple seasons?  I'm tired of looking at Giambi and Chien-Ming Wang.
Posted by Unknown at 9:07 AM No comments: