This has all happened very quickly in the last half hour or so, but it was reported earlier by multiple Yankee beat writers that Derek Jeter returned to Charlotte today for an "unscheduled visit" with the surgeon who performed his ankle surgery last year.  A quick press conference was set up by Cash to update everyone ont he results of that visit, and via Bryan Hoch, a CT scan on the ankle revealed a "small crack" in the part of the ankle that was originally injured.

This is obviously not good news for Jeter, who has been more or less spinning his tires trying to work his way back after suffering a setback late in spring camp.  No word yet on how much longer this sets Jeter's return schedule back.. More on this story as it becomes available.

** UPDATE 3:39 PM- Via Andrew Marchand, Cash said Jeter is expected to be out until "at least after the All-Star break.  Bummer. **
Posted by Unknown at 3:25 PM No comments:

Anatomy Of An Unexpected Comeback

Things weren't looking good for the boys last night.  They were down 3-0 heading into the bottom of the 7th inning and hadn't shown many signs of offensive life against Arizona starter Wade Miley.  He had cruised through 6 innings of work on just 77 pitches, the kind of efficiency that few Yankee starters have had this season, mainly on the strength of his 2-seamer.  The Yankee lineup played into Miley's game plan by swinging early in a lot of at-bats, and the fact that Miley hadn't had to go to his curveball and changeup much didn't bode well for the Bombers as they opened the bottom of the 7th with the weakest part of their lineup.  But as the old saying goes, that's why they play the game and the game the Yankees played in that half inning was the kind of smart, clutch, winning baseball that they were unable to play in so many close games last season.

Brett Gardner Still Doesn't Have A Stolen Base This Year

Really, he doesn't.  And I'm not trying to imply that it's a bad thing.  Gardner has come up with some big hits early on, he's popped 2 HR, and he's starting to boost that tripleslash up to a respectable leadoff man level.  I just find it incredible that the fastest guy on the team and one of the top base stealing threats in all of baseball doesn't have a single one in 13 games.  For all the talk about how the Yankees were going to have to play small ball and run more this season to manufacture runs, they have just 3 SB as a team right now, one of them by Chris Stewart.  That's right, THE Chris Stewart is currently the team leader in SB and Brett Gardner is not.  Inconceivable! 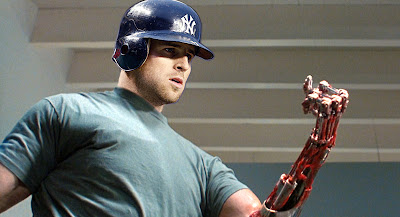 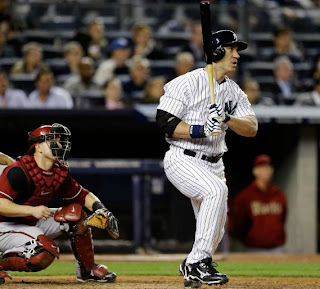