- Mike Axisa at RAB breaks down all 3 options the Yankees have to look to in order to replace Pettitte while he's on the shelf.  While he doesn't come right out and say it, it seems like he was leaning towards the Mitre-Nova option.

- Mike's colleague, the incomparable Joe Paw, discusses the possibility of adding a Marlin or 2 to the mix.  I can't say I'd be opposed to having Ricky Nolasco as a replacement for a few months or Leo Nunez in the bullpen, I certainly wouldn't consider giving up top prospects for them.

- Lucas Weick at BBD makes a strong case for Nova getting the spot.  It's true that Mitre has been better out of the 'pen than as a starter; it's true that Nova has been solid in Triple-A this year; and it's true that giving him work this year better prepares him to compete for a spot in next year's rotation.  Not a lot to argue with here.

- Stephen R. at TYU examines the option of trading for Ted Lilly as a quick fix.  This one doesn't look so appealing to me.  Lilly's numbers are nothing to write home about, and with his lack of velocity this year, going back to the AL could spell disaster.

- Mark Feinsand tells us that no matter what the Yankees do short and long-term to replace Pettitte, at least it won't be Joba who gets the spot.  Thank fucking God!

- This quote from Cash to ESPN NY tells the whole story right now:

"Right now, I'm not inclined to make a move.  I always prefer to fix things from within.''

Amen, Cash!  The bottom line is, it's too early to start getting worked up about what the Yankees have to do, need to do, are going to do about replacing Pettitte in the rotation.  They have 2 viable options in-house in Mitre and Nova and so they should get the first crack at it before everybody starts hitting the panic button and trading for rental players who may or may not be better options.  Mitre has held his own in spot starts and Nova factors pretty big into the future, so let's see what they can do, let's see how Andy's recovery goes, and let's all calm down, take a deep breath and remember that the Yankees are still 25 games over .500 with a 3-game lead on Tampa and a 6.5-game lead on the Wild Card.

Everybody say it with me now.  "Woosah.  Wooooosah."

Posted by Unknown at 4:01 PM No comments: 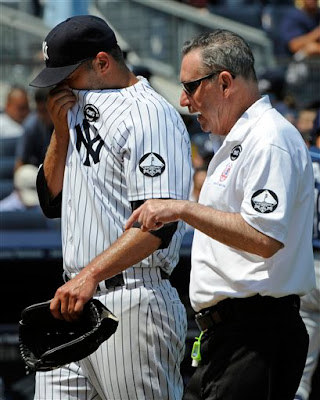 Now if you'll excuse me, I have to go consult my Tarot cards and see if I can switch the target of my new-found dark powers and put a hex on Kevin Youkilis.
Posted by Unknown at 8:38 AM No comments: