The Bright Side For A.J. 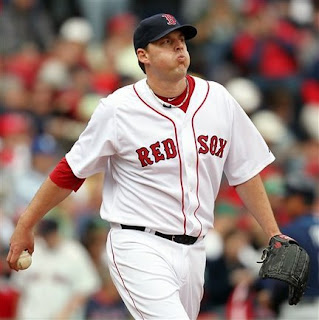 (Hang in there, Baby Huey.  Courtesy of masslive.com)
Tough loss for A.J. last night, in the style that we're all too familiar with.  He cruised through 6 innings, then got rattled, missed spots, and completely blew up in the 7th after Gardner and The Horse couldn't come up with the foul ball that would have ended the inning.  But...

At least he's not John Lackey.

Same contract, same money, but the performance Lackey is putting on this season makes A.J.'s 2010 look Cy Young-worthy by comparison.

"Those types of numbahs ahh NAWT going to cut it in fahhckin' Beantown, chief!  This is the home of the fahhckin' Bruins.  The grittiest, toughest team with the most hahht since the '04 Sawx!!!"

Seriously, though.  John Lackey sucks.  I wouldn't let him pitch a game in the Little League World Series right now.  So A.J. can take solace in the fact that at least he's doing more to live up to his overpriced, undeserved contract.  Right?  Right??
Posted by Unknown at 12:25 PM No comments: