Putting The Pitching Into Perspective

I've received a few comments regarding my take on the Yankees' deadline tactics over the last few days, basically arguing that the Yankees NEEDED to add a starting pitcher because they had no clear cut #2 option for the playoffs.  I'm sure there are plenty of Yankee fans out there who feel the same way, and probably a bunch more who are peeved that no bullpen arms were added, but I still stand firm in my belief that the Yankee staff is just fine, has been just fine all season, and will continue to be just fine moving forward as long as guys stay healthy.  Check out these numbers:

That shows the breakdown of the top 7 teams in the American League (in no particular order) and what their teamwide pitching stats look like for this year.  You can gather from this that the top 3 pitching teams in that list are teams A, B, and D, with A having the best all around numbers.  I'll give you 3 guesses to figure out which team is which.

There you have it, folks.  The numbers don't lie.  The Yankee pitching staff, including the rotation that people swear ABSOLUTELY NEEDED to add a frontline starter, is the best in the American League.  Yes, the rotation has been carried by CC Sabathia (5.6 WAR), but that does not lessen the positive results it has gotten from Colon (2.2 WAR) and Garcia (2.2).  Even though we probably all thought that both of these guys would be long gone by now, thanks to injury or poor performance, they aren't.  They're still in the rotation and they're pitching as well as they have all season.  A.J. and Ivan Nova have combined to contribute over 230 innings of 2.0-WAR ball, and Phil Hughes is slowly making his way back to form.  In the bullpen, D-Rob (1.8 WAR) and Mo (1.6) have carried the load, but the team has gotten positive contributions from Hector Noesi, Luis Ayala, Cory Wade, and even Boone Logan.  Before he went down, Joba was putting up solid numbers and the team was seeing solid results from it.  This staff doesn't allow a lot of runs, they get good contributions from their starters, they limit damage, and they miss bats.

And those numbers you see above have been accumulated with the people the Yankees have had in-house all year.  We've waited and waited for guys to fall off and they haven't, and they haven't experienced any major crippling injuries that have hurt their depth or performance.  They've been steady, they've been consistent, and they've been effective.  You can call it luck, call it overachieving, but it doesn't change the results.  Sooner or later we have to start seeing this as what it is, and that is a damn good job by the pitching staff.

For all the talk about the Angels' dominant pitching, their rotation falls off dramatically after Weaver, Haren, and Ervin Santana, and they don't generate nearly as many Ks as the Yankee staff.  Do you really think that A.J. or Freddy can't go out and beat a Joel Piniero or a Tyler Chatwood in a Game 4 of a playoff series?  The Fraud Sawx are down to Beckett, Lester, a rickety Erik Bedard, and John Lackey in their rotation, with plenty of question marks ahead of Bard and Papelbawn in the 'pen.  I don't know about you, but I'll take my chances against all those guys when the Yankees are countering with their top 4, and I'll take my chances with D-Rob and Mo vs. Bard and Pap.  The Tigers are Verlander and a bunch of #3-#4 guys, the Indians were Justin Masterson and the same until they got Ubaldo.  Are you seeing what I'm getting at here?

The point is, the Yankee pitching is just as good as all the other top teams in the AL on its worst day, and over the course of 105+ games it has proven to be better.  The Yankees didn't have as big a need for Ubaldo or Kuroda or Wandy or Bedard or Harden as their competitors did, and that's why they weren't as willing to up their prospect ante to add any of those guys.  And while their competition is throwing guys like Andrew Miller and Jeanmar Gonzalez out to plug their injury holes, the Yankees have a solid legit Major League option in Ivan Nova, and top prospects like Adam Warren and the recently promoted Manny Banuelos to come in and fill a gap if needed.

So for anybody out there who is still salty about no moves being made, here's a bit of advice.  Get past your feelings and your preconceived notions and check the numbers.  The Yankees, injuries and all, have a solid pitching staff and made the call as an organization to stick with the staff they have moving forward.  And given the results they've already gotten from that staff, it's tough to argue with that decision.  Can something happen to change that?  Of course.  But those same things can happen to everybody else.  And like I said last night, the Yankees have the pitching pieces in place to be covered today, tomorrow, next month, and next year.  How many of these other teams can say that right now?
Posted by Unknown at 12:52 PM No comments: 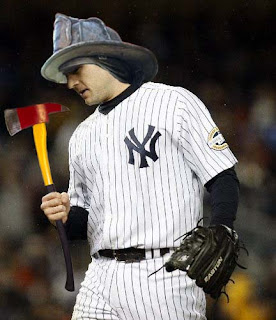