Let's Give A Call To The Bench

They haven't gotten a whole lot of ink this season while the majority of the focus has been on the injuries, RISP Fail, and starting rotation, but the contributions of the Yankee bench this season should not be going unnoticed.  Their collective role has become more important with the injuries suffered by everyday players in the lineup and Joe's need to keep the older players in the starting lineup fresh with regular rest and DH days, and across the board the bench guys have lived up to those roles.  Their importance is only going to increase with Alex Rodriguez down and out for the next 6-8 weeks, and much like certain unsung members of the bullpen earlier in the season, the ability of these unsung bench bodies to produce could be the extra little boost the Yankees need to keep marching forward and not miss a beat with A-Rod gone. 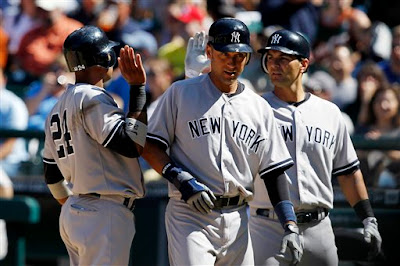 Well it took almost 100 games this season, which is later than it's been in recent seasons, but the Yankees finally had to play their first game without A-Rod due to injury yesterday afternoon.  Eric Chavez got the start at third base in his place, both Raul Ibanez and Andruw Jones were in the lineup to fill out the DH and OF spots, and Joe went with a 1-2 of Ichiro and Derek Jeter in the batting order to attempt to keep the middle of the lineup as deep as possible.  Ivan Nova was the starting pitcher against Hisashi Iwakuma, and the Yanks were looking to at least salvage something from this series with a win.

- Jeter isn't the first name that comes to mind when discussing making up for A-Rod's lost power in the lineup, but he sure looked powerful hitting a 1-out homer to give the Yankees a 1-0 lead in the top of the 1st.

- Of course Nova gave the lead right back in the bottom half.  The soft liner singles weren't the problem; they happen.  The back-to-back walks to load the bases and force in a run were, and they led to another run on a fielder's choice in the next AB.  Can't give shitty teams free baserunners.

- Keeping the "missed opportunities" theme from yesterday going, the Yankees put at least 1 runner on base in every inning against Iwakuma, 2 each in the 3rd, 4th, and 5th innings, and came away with no more runs to add to Jeter's leadoff HR.

- It took Oliver Perez, yes THAT Oliver Perez, relieving Iwakuma in the top of the 6th to get a 1-2-3 inning for Seattle.  Go figure.

- Nova kept the Mariners at 2 runs through 5 innings, but he didn't have much in the way of command and was yanked for Clay Rapada after walking the first 2 batters in the bottom of the 6th, his 5th and 6th walks of the day.

- Rapada and David Phelps did the job, and the lineup FINALLY put enough timely hits together to recapture the lead in the top of the 8th.  The big blow was a pinch-hit bases-clearing double by Jayson Nix, and Russell Martin followed up with an RBI single to make it 5-2 Yanks.

- D-Rob handled the 8th, Soriano the 9th, and the Yankees were able to enjoy their flight back to civilization with a series win.  After the weak LD barrage in the 1st inning, the Mariners managed just a single hit from then on.