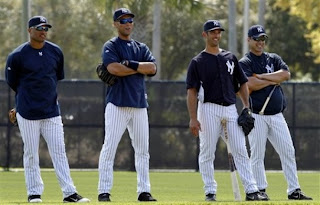 For some reason, Men's Journal magazine decided to interview Buck Showalter for their April issue.  He had some not nice and rather stupid things to say about the Yankees, specifically one Derek Jeter.

"The first time we went to Yankee Stadium, I screamed at Derek Jeter from the dugout.  Our guys are thinking, 'Wow, he's screaming at Derek Jeter.' Well, he's always jumping back from balls just off the plate. I know how many calls that team gets -- and yes, he pisses me off."

Seriously, Buck.  Let it go.  Move on.  Grow up.  I did like his jab at the MSM's treatment of Theo and the Fraud Sox, though:

"I'd like to see how smart Theo Epstein is with the Tampa Bay payroll.  You got Carl Crawford 'cause you paid more than anyone else, and that's what makes you smarter?"

+1 for Buck there.  I can look past the Jeter bashing if you're going to call out the Fraud Sox.

"That's why I like whipping their butt. It's great, knowing those guys with the $205 million payroll are saying, 'How the hell are they beating us?'"