Look At This Guy!

Welcome aboard, Curtis.  Can't wait to see your centerfield Web Gem bonanza begin.
Posted by Unknown at 4:27 PM No comments: 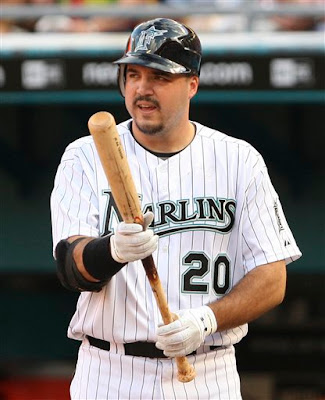 The Yankees and Nick Johnson are talking about the sweet-swinging lefty and on-base machine replacing Hideki Matsui as the world champions’ designated hitter on a one-year deal.

“We have had dialogue, things are moving forward,” agent Rex Gary said of talks between the Yankees and their former first baseman. “Something could happen to speed things up, but it’s hard to predict.”

Seattle is interested in the 31-year-old Johnson to play first base, an opportunity he wouldn’t have in The Bronx because of Mark Teixeira’s presence, but the allure of returning to the Yankees may be the difference for Johnson.

Johnson played with the Nationals and Marlins last year and batted .291 with eight homers and 62 RBIs in 133 games and had an on-base percentage of .426.

“He can still hit,” an NL talent evaluator said of Johnson, who made $5.5 million last season, the final leg of a three-year $16.5 million deal. “He is an on-base percentage guy who will hit some homers in Yankee Stadium.”

Considering Johnson’s injury history, any deal likely would include incentives for at-bats. As a Yankee, he missed the entire 2000 season with a right hand injury. He was limited to 38 games in 2008 with the Nationals due to a right wrist problem. A fractured right femur late in the 2006 season cost Johnson all of 2007. A lumbar strain and a fractured right cheekbone limited him to 73 games in 2004 as an Expo. As a Yankee in 2003, he missed 61 games because of a stress fracture in the right hand. (story courtesy of the NY Post)

And that's why you should never worry about the Yankees, even when they lose a 29-HR, 90-RBI guy who was the World Series MVP and maybe their 2009 starting left fielder. Because there's always a backup plan. And bringing Nick Johnson back into the fold at what will definitely be cheaper than the $13 mil Damon is looking for and the $6.5 mil that Matsui got from Anaheim looks like a pretty damn good backup plan.

Sure the guy is like Mr. Glass when it comes to durability, but that just gives the Yankees more leverage in the deal they offer him. When he is healthy, he's the perfect fit for this lineup: a lefty that hits lefty pitchers well, a guy who makes good contact, takes a lot of pitches, and works plenty of walks. His power numbers should go up playing in the new Stadium and assuming he can stay relatively healthy he should be able to approximate Matsui's production to a close enough degree that between he and Granderson, the Yankee offense shouldn't lose anything in terms of output by losing Damon and Matsui.

Another added benefit is the fact that Johnson is an average-at-worst Major League first baseman and gives the Yankees a viable option to play at 1B on days where Teixeira needs a day off or day at DH instead of Swish, Jorge, or Eric Hinske. Any Yankee fan who remembers watching Gary Sheffield stumble around the bag a few seasons ago can tell you how important it is to have a solid backup option at first.

I don't like to be the type to jump the gun on rumors like this, but bringing in Johnson to plug the DH gap is a good fit for the team and still leaves them with plenty of financial wiggle room to go after another starting pitcher. Johnson has seen life on the other side of Pinstripe Land and so far that life has been consistently filled with losing seasons for him. At 31, he should be more concerned with winning games and a ring than money and would be foolish to use the Matsui logic and go to Seattle just to play first instead of coming back to New York to contend for a title.
Posted by Unknown at 12:58 PM No comments: