OK, so Jorge is out with a stiff neck and Cervelli has a strained hammie.  I know I've joked for the better part of the last couple months about the road being paved for Jesus and all the signs being there, but now I think I might have fucked up and jinxed the 2 guys that the Yankees already have.  I'm sorry, God, I didn't mean to piss you off.  Especially on the anniversary of your son getting his driver's license or whatever the hell Good Friday is for.  You can cut the shenanigans now.

Seriously, who the fuck is the 3rd-string catcher?

And can somebody get Jorge and Frankie some ice?
Posted by Unknown at 6:07 PM No comments: 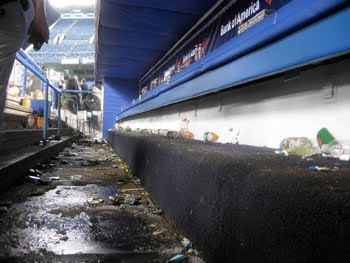 In keeping with the tradition of the last few seasons, the 2010 Yankee bench will not be stocked with All-Star or even above-league-average players.  In staying committed to their plan to keep the payroll at or near $200 million, the Yanks looked to fill the 25-man roster with young players from within the system who they believe can be productive players in limited roles and bargain basement veterans with a track record of success.  With the team almost certain to carry 12 pitchers to start the year, that leaves 4 spots open on the pine.

It starts behind the plate, where the Yankees pass the backup catcher torch to Francisco Cervelli.  We've seen cameo appearances by Cervelli before and the question has always been whether he could hit enough at the Major League level to hold a spot as a backup catcher.  When injuries to Jose Molina allowed him to get some full-time action last year, Cervelli impressed coaches and management with not only his rapport with the pitchers and ability to defend and call a good game, but also with his bat, which showed just enough pop to convince the team that he could be a full-time player.  Cervelli's role will be more important than that of your average backup catcher this year as the Yanks are looking to limit Jorge to 100-110 games so we'll have to see if his offensive numbers can hold up over more plate appearances.

The backup spots around the infield will be handled by Ramiro Pena.  With Nick Johnson, Nick Swisher, and Jorge Posada all capable of spelling Teix at first, it is the other 3 infield positions that need covering and Pena's terrific defensive abilities make him more than capable of playing second, short, and third well.  He, like Cervelli, had questions about his bat, but showed some surprising pop in limited at-bats last year.  Barring serious injury to any of the starters, Pena will only be needed to ensure that A-Rod and Jeter can get rest when they need it, so there shouldn't be much worry about whether or not Pena can produce in his at-bats.  And with the depth the lineup already has, Pena's defense should be enough to cancel out any 0-for days he has at the plate.

The outfield is where we find our last 2 bench players.  Randy Winn was a free agent brought in to compete with Brett Gardner for the everyday left fielder spot.  Gardner's terrific speed, improved bunting, and Winn's weak-hitting spring all contributed to Brett winning the spot and Randy getting the 4th outfielder role.  While he isn't expected to light the world on fire at the plate, Winn should bounce back a little from last year's horrible numbers and his ability to play above-average defense in all 3 outfield spots gives the Yankees solid defensive coverage in case of injuries or off-days.

One thing Winn does just as poorly as Gardner and Curtis Granderson is hit left-handed pitching, and that's where Marcus Thames comes in.  Thames, a former Yankee, was brought in to compete with Jamie Hoffmann for the 5th outfielder role and despite a poor showing in the spring, did just enough to earn that last spot.  Thames, a righty, will be used mostly to match up with lefties, and his past success in the Majors more than likely gave him the boost over Hoffmann.  He is a below-average outfielder, so expect to see Thames mainly as a late-game situational pinch hitter or getting starts on days where Gardner has a bad matchup.

If any of these 4 underperform or get hurt, there are viable options in Triple-A to cover them.  Kevin Russo had an impressive spring and could give Pena a run for his money if Pena doesn't hit well enough to justify his spot.  Juan Miranda has always shown promise as a hitter, but would need a lot of injury help to crack the lineup as a 1B or DH.  And guys like Greg Golson, David Winfree, and Jon Weber could see time in the outfield if injuries start piling up.

The one wild card is The Almighty, Jesus Montero.  The Yankees don't plan to use him this year as they want him to continue to work on his catching at Triple-A.  But with Nick Johnson and Jorge Posada playing the positions he would play and both being prone to injuries, there is a chance we could see The Son in the big leagues this year.

As usual, the Yankees aren't expecting much out of their bench other than to fill in for players that need rest.  None of these 4 guys would be penciled in anywhere above 8th in the lineup, so as long as they know their roles and perform admirably when called upon, the Yanks will be happy with that.  Here's hoping that that's all these guys need to do this year.
Posted by Unknown at 9:27 AM No comments: