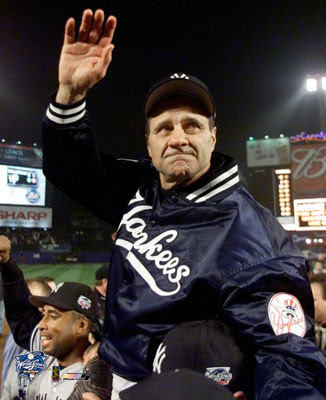 With Mr. Torre set to make his first appearance against his former team later tonight, it only seems fitting that we at AB4AR honor him with some linkage.

- ESPN NY's Yankee blog has a collection of Torre stats from his Yankee tenure, just in case you needed a reminder of just how good those Yankee teams were.

- Greg Fertel at Pending Pinstripes has a great idea about what to do with Chan Ho Park.  I sat at my computer nodding in agreement the whole time I was reading this and then stood up and applauded at the end.

- My boy Lenny Neslin has his AL and NL All-Star picks.  Major props to Lenny for not buying into the anti-Pettitte All-Star rhetoric that's been coming from the blogosphere.  And even bigger props for picking Brett Gardner as the 6th AL outfielder.  I'd like to think I had something to do with influencing his decision, but I'm sure he was smart enough to realize Gardner's awesomeness on his own, even if nobody else does.

- Joe Paw at RAB discusses how well the Yanks have hit lefties this year.  Be afraid, Jon Lester.  Be very afraid.  Now if only Joe could come up with an explanation for why the Yanks can't seem to hit shitty pitching (cough, cough: Moyer, Lopez).

- Matt at Fack Youk looks back at the 1955 World Series between the Yanks and Dodgers.  When you get done with that, go to the homepage and read through the entire series they're doing on every Yankee-Dodger World Series.  Real good reading, especially if you're far too young to have experienced those matchups like I am.

Finish up the Friday strong, people.  And then get home and plop your ass down on the couch to watch Joe's return.  It should be fun.
Posted by Unknown at 1:37 PM No comments: 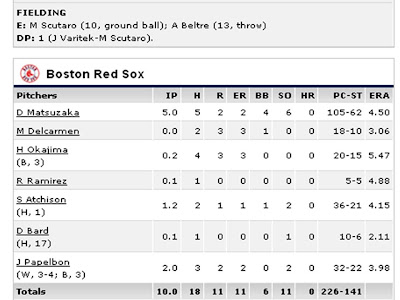 (courtesy of ESPN.com)
Get a look at that, would ya?  Just another masterful exhibition of lockdown pitching and Gold Glove-caliber defense from the Sawx last night.  Even aftah Papelbawn blew anothah save, they wuh still able to scratch out a win thanks to Pehdroiah.  Whaht a fahckin' game-uh that Pehdroiah is!  He is the fahckin' hahht and soul of this fahckin' team.  He is tha Tawm Brady of Red Sawx Nation.

In all seriousness, I can't believe people (and by people, I mean everybody at ESPN) are getting excited about the Sox crawling back into contention in the AL East.  It's a fucking joke.  After all their moves that were supposedly committed to making them better defensively and on the mound, they have had to win games this year with their offense.  This team would be nowhere right now without Youkilis and Adrian Beltre, and maybe a little of Big Sloppi mixed in.  And call me crazy, but I don't see Ortiz or Beltre keeping this up all year long.  And yeah, Pedroia had a big game last night, but that doesn't change the fact that he came into the game hitting .280 with 36 RBIs, which is nothing to write home about.

The bottom line is, Boston's pitching and defense absolutely sucks.  Scutaro and Beltre are both on pace for 20-30 errors apiece, neither Martinez nor Varitek can stop a bad pitch or throw anybody out on the basepaths, and their outfield defense has been pedestrian at best.  Their rotation is Lester and Buchholz and nothing else, and there's nobody in their bullpen worth a shit except Daniel Bard, who the Yankees happen to own.

So go ahead, Fraud Sox Nation.  Bring out your pink hats and green jerseys.  Get all jazzed up about leading baseball in runs scored right now.  Don't pay any attention to the fact that some of these guys are going to start trending downward as the season continues to play out.  Pitching and defense is what wins in the playoffs and you ain't got it.  So enjoy your little run now and then come back and talk to me in late August-early September when you're 9 games out and looking up at Tampa in the Wild Card race.
Posted by Unknown at 9:19 AM No comments: