Damon Vs. The Yankees: The Saga Ends 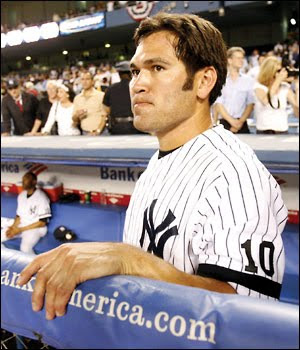 
If...July rolls around and the Yankees are dissatisfied with their outfield/DH production and are looking for a Damon-esque player, then they probably will rue not behaving like their behemoth-market self to keep Damon. If Damon is unable to find significant dollars and/or ends up slumming in, say, Cincinnati or Oakland, then he may wonder how he let the Yankees get away.

Like his departure from Boston to New York as a free agent, Damon leaves a championship in the background, and leaves angry and in a financial dispute. He landed well with the Yankees (four years, $52 million). But there will be no repeat this time, and he may not exceed $7 million plus deferrals.

He might have chased a few extra bucks and left behind a Stadium that ideally fit his swing and a winning, big-market club that fit his outsized personality. Of course, the Yankees, too, are losing that Stadium swing and imperturbable personality, and are replacing Damon with a human first-aid station (Johnson) and role players (Winn and Brett Gardner).

From the outside, it seems like both sides needed to relent. But pride and inflexibility reigned, and now you wonder if regret is coming next.


Preach, Joel, preach! Nobody could have summed up the Damon-Yankees situation that played out this off-season any better than that. But it's a hot topic today so I'll get my 2 cents in too.

Damon's approach shouldn't have come as a surprise to anybody, especially the Yankees or their fans. He wanted more money when he was in Kansas City and he got traded; he wanted a big-money contract in 2001 that Oakland wasn't going to give him so he signed with the Red Sox, AKA the highest bidder; when his contract was up with them, he wanted more money and more years than they were willing to give him so he bailed to the highest bidder again, the Yankees.

Damon is a classic Scott Boras client; he follows the money and drinks the Boras Kool-Aid when it's contract time, always putting years and money ahead of winning and team fit, and holding out to wait for a better offer if Boras tells him it's out there. During the prime of his career that was a solid strategy that earned him a lot of cash and a few World Series titles, but now that he's 36 and a free agent during a poor economic time when teams are much more reserved in their spending, that strategy left him high and dry.

Damon can say whatever he wants about how much he wanted to come back and how much he loved being a part of the team and the locker room, but it's the same story he sang when he jumped ship from Boston to New York in '05. The fact of the matter is, the 2-year, 14-mil offer he got from the Yankees, while not being what he and Boras wanted, was the best and so far only offer he received. It was a more than fair offer for an above-average offensive player who is also a defensive liability and a potential injury risk. If Damon really loved being and playing in New York as much as he said, he would have taken the deal, realizing that competing for more World Series titles, possibly reaching 3,000 career hits in pinstripes, and becoming an eternal Yankee legend in the hearts and minds of Yankee fans for generations to come is just as good as making a few extra dollars. When you can walk into any bar or restaurant in New York after you retire and never have to pay for a meal or drink for the rest of your life, those couple of lost millions aren't that big a deal.

The puzzling part to this soap opera was the Yankees' approach. After years and years of spending money to put a championship team together, they finally decide to put a hardline on their payroll the year after they win the title again and when it involves bringing back a key piece to that title-winning team. When you consider that the Yankees were in the driver's seat with the Damon negotiations, it makes their decision and the fact that they stood so pat on their position even more bizarre. Damon and Boras were standing out there like the fat kid waiting to get picked in a kickball game and the Yankees were the only team showing any interest in picking him. Instead of just sucking it up and picking the fat kid, they decided to take the blind kid with polio.

Every day that passed gave the Yankees more and more leverage to come back to Damon and say "Hey chief, you wanna play ball next year or not? One year, 6 mil. Take it or leave it," and they still thought that wasting $2 million on Randy Winn to platoon with Brett Gardner was a better financial and baseball decision than forking over an extra $4-5 million for Damon. Now I'm all for being financially responsible and I fully understand the team's position of not wanting to inflate their payroll anymore after the money they threw around last off-season, but to be so nit-picky about $2 million instead of $6 or $7 million for a still very productive player who is tailor-made for their stadium and their clubhouse was more Oakland A's than New York Yankees, and more "let's watch our expenditures and double check the balance sheet" than "let's win another championship." In a nutshell, it went against what has become the "Yankee Way" under The Artist Formerly Known as George Steinbrenner.

Basically what this whole ordeal came down to was the Yankees having a plan this off-season and Johnny Damon being a part of that plan, but not a big enough part that the Yankees were willing to risk throwing the rest of the plan out of whack just for him. After seeing how the theory that "pitching wins championships" played out for them in the 2009 postseason, they made sure they addressed that first by bringing in Javy Vazquez and using the rest of their budget to fill out the roster the way they thought was best, which was something that Damon apparently couldn't accept. Only time will tell which side was right and which side was wrong, but my money would be on Joel Sherman's theory of both sides realizing the errors of their ways and both sides spending some lonely summer nights laying in bed in their hotels, thinking about what could have been.
Posted by Unknown at 11:08 AM No comments: