We don't get too many emails here at AB4AR, but since I know there are some of you readers out there who are just too lazy or scared to write in, I took the liberty of asking (and answering) the questions I know everyone is dying to ask me.  Let's face it, my Yankee insight and opinions know no boundaries.  It would be wrong to keep these answers to myself.  Let's get to the bag!

* What's your take on the Yankees not starting any negotiations with Mo yet?  I would argue that he's more important than Lee or Jeter, right? - Matt, The Bronx.

Good question, Matt.  I also think it's a little strange that the Yankees haven't reached out to Mo and his agent to lock him up for next year.  And your argument that Mo is more important to next season's success than Lee and Jeter is correct.  Mo is the one guy that the Yankees absolutely can't be without next year (would you feel good about D-Rob or Joba having to close?), so he should be a higher priority.  But if you think back, this is kind of how Mo's new contracts have always gone.  He's such a low-maintenance guy that it's almost a foregone conclusion that he will re-sign.  And he's still at the top of his game so there really isn't much to negotiate about.  The Yankees are going to pay him a shit ton of money and he's going to be happy with it.  My guess?  1-year deal for 2011 at $16 mil with a player option for another year.  No worries, Mo will be back.

* What kind of deal should the Yankees offer Andy to come back next year?  And what's the backup plan if he decides to retire? - Sarah, Charleston, SC.

I don't think there's a certain dollar value that is going to swing Andy one way or another.  The Yankees gave him $11.5 mil to come back in 2010 and that worked out pretty well, so I would imagine the next contract would be almost identical, maybe bump him up to an even 12.  But my take is still that Andy isn't coming back after how badly his body broke down at the end of this season.  He's going to be 39, and while it's obvious he still has the talent to get it done out there, it just doesn't seem like his body can keep up with his skills anymore.  After he sits down and talks to his family, I think he's going to hang it up.

Which brings us to the backup plan.  Assuming the Yankees get Lee, which I believe they will, that would leave them with CC, Lee, Hughes, A.J., and an open 5th spot.  I'm not in love with any of the other free agent options (Kuroda, Westbrook, etc.) and Zach Greinke has said he doesn't want to come here, so I would pencil Ivan Nova into the 5th spot and see if he improves enough in Spring Training and early in the season to lock down the job.  If not, we've established that the Yanks have a ton of pitching talent in Double- and Triple-A (Killer B's, Noesi, Warren, Phelps), so the 5-spot could be the audition role for some of those guys.  You gotta find out if these kids can get it done in the Majors at some point, right?

* Now that Jorge has been told he will be primarily DH'ing next season, how do you see the Yankee catching situation going next season?  Can The Jesus really win the job and hold it down all year? - Jake, Middlebury, CT.

I don't see any reason why he can't.  All indications are that the Yankees are going to give him the job to lose in Spring Training, and I still say there's no way he can be as bad a defensive catcher as Jorge so why not give him the job and let him learn?  For the most part the Yankees call pitches from the dugout anyway, so there's no pressure on Montero to call games, and the more experience he gets both behind the plate and at it, the better he's going to get.  Jorge's sun is setting on his career while Montero's is just starting to rise.  It's time to get the kid into the lineup and see what he can do.  My vote would be to have him catch 100-120 games next year and let Cervelli and Posada split the difference.  Then, depending on matchups and health, have either Posada or Jesus DH on the days that Cervelli catches with the other at attention to step in for Frankie as a late-game pinch hitter/replacement.

* What's Option B if the Yankees somehow lose out on Cliff Lee?  Does Cash get back on the phone with KC with an offer for Greinke that they can't refuse? - Ruben, Valencia, CA.

Since they've already got the ball rolling on the Lee situation while Andy is taking his time on his decision, the immediate Option B becomes "bring Andy back at all costs."  If they can do that, then at least you're still coming back with CC, Andy, Hughes, and A.J.  Just like the same situation if Andy doesn't come back, I would make the 5th spot in the rotation the 'Ivan Nova/whoever else from Triple-A earns a start if Nova sucks' role and go from there.

I personally don't like the idea of giving up any amount of top prospects for Greinke.  Yes, he's a stud, but unlike many of the other sites out there, I will admit that his SAD scares me to death.  I could see the kid bombing out in NY because of it.  It's easy to deal with that when you're pitching in KC where nobody gives a fuck.  Try handling your freakshow pussy disorder when you've got the NY media breathing down your neck on every inning you pitch.  Plus, with a stockpile of arms like the one they have now, I think it's in the team's best interest to try to build up the next generation of core Yankees around them.  Pitching wins championships and the Yankees have a shit ton of high-quality pitching in the Minors.  Why trade it all away before you have the chance to see what they can do for you?

Now if the Yankees don't sign Lee AND Andy decides to retire, then you've got a problem.  The Yanks would be situated with CC, Hughes, A.J., Nova, and a big old question mark.  If this scenario, unlikely as it is, plays out, that's when you'll see Cash on the phone calling up the agents for Kuroda or Westbrook or offering 2 of the 3 Killer B's, Gardner, and Austin Romine for Greinke.

* Of all the Yankees that had down years this year (Teix, A-Rod, Jeter, Jorge, A.J., Joba), which one do you think will rebound to have the best 2011? - Marcus, Manhattan.

Definitely Teix.  He has the best overall skill set, is still in his prime, and should be back to 100% healthy by the time Spring Training 2011 rolls around.  If he had any kind of consistency this year, he could have hit .280/.390/.530 with 40 HR and 125 RBIs.  I expect him to work with Kevin Long in ST on fixing his issues from last year and finding that consistency.

A-Rod will have a better year next year, but no longer the monster numbers he used to put up, Jorge will be better without getting beaten up behind the plate all the time but not what he used to be, Jeter will probably be about the same, Joba might not even be a Yankee next year, and it would be tough for A.J. to be any worse than he was in 2010.  But the smart money for a big bounce back would still be on Teix.


* You're such a smart and funny guy and your blog is the best!!  How do you manage to come up with such awesome material?  I think you are incredibly sexy and I want to have your babies. - Kristy, Pewaukee, WI.

Why thank you, Kristy.  I am quite awesome and I appreciate you taking the time to not only notice that, but to compliment me on it.  I can't really say where I get my material from.  A lot of it is just spontaneous ideas that pop into my head and then I just let it roll from there.  I would also have to give some credit to the copious amounts of alcohol I drink and the occasional paint huffing session.  I guess what I'm trying to say is that my awesomeness and the blog's awesomeness are complicated issues with more than one source, all pulled together into a tight little package by the natural levels of awesomeness within my own chiseled, hard body.  And yes, I am a sexy motherfucker.

Thanks for the fictional emails, kiddies.  Until next time...
Posted by Unknown at 2:58 PM No comments: 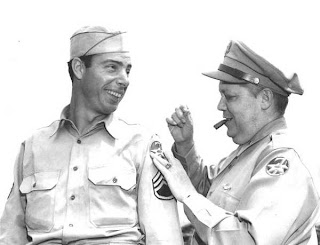 (Only uniform besides the pinstripes that Joltin' Joe looked good in)
... And thank a veteran that you know.  Or at the very least take a moment to sit and reflect and be thankful for all they've done for you and this country.  It's because of these brave people that I even have the ability to write this blog and say whatever I want so a big thank you to everybody who has served or is serving right now to protect our freedom.  I know I'm too much of a pussy to ever be able to do it, so much respect to all those ballsy enough to put their country and its citizens before themselves.
Posted by Unknown at 9:13 AM No comments: