The MVP talk is a bit of a stretch, but Jeter has been simply fantastic this year.  He's once again carrying the offense through an up-and-down stretch where the Yankees are battling injuries and slumps, and continuing to punch Father Time in the face while he does it.  In the past week I've noticed a new wrinkle to Jeter's game that hasn't been seen much in years.  Believe it or not, Jeter has started hitting the ball to left field with authority again.  Take a look.
Read more »
Posted by Unknown at 2:37 PM No comments: 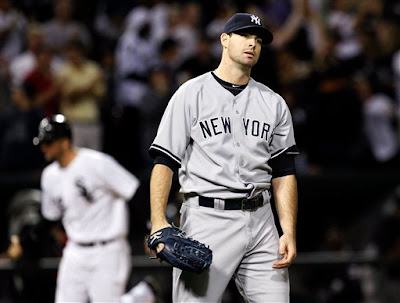 Considering the injuries that they've had to deal with, the job the Yankee bullpen has done this season has been nothing short of outstanding.  Rafael Soriano has been even better than he was in his standout 2010 season that inspired the top Yankee brass to offer him his big contract, D-Rob has been quietly awesome again, and there have been big contributions from some very unexpected sources to help soak up middle innings while other guys were out.  It is those middle innings that have become a problem this month, as the 'pen has regressed to a 4.29/3.44/3.55 line in 50.1 combined innings of work.  The problem has been the bulk of the guys pitching in front of D-Rob and Soriano starting to struggle, leaving the pickings slim and risky when Joe has to manage the 6th and 7th innings.  The Yankees didn't make a move to add bullpen depth at the trade deadline, counting on the return of Joba Chamberlain being a stabilizing factor.  That hasn't happened and now the middle relief corps is turning into a weakness at the wrong time of the season.
Read more »
Posted by Unknown at 9:49 AM No comments: 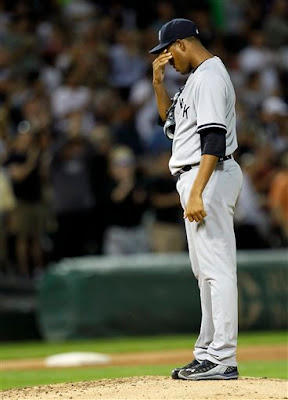