The MVP talk is a bit of a stretch, but Jeter has been simply fantastic this year.  He's once again carrying the offense through an up-and-down stretch where the Yankees are battling injuries and slumps, and continuing to punch Father Time in the face while he does it.  In the past week I've noticed a new wrinkle to Jeter's game that hasn't been seen much in years.  Believe it or not, Jeter has started hitting the ball to left field with authority again.  Take a look.

That's a pretty standard Derek Jeter spray chart right there for the month to date.  A lot of hits back up through the box or to the opposite field, most of the power into right, and a large dose of groundball outs to the pull side.  That's a near perfect representation of the type of hitter Jeter is and has been for some time now.  But shrink the sample size down to just this past week and the trend starts to shift.

You've still got your daily recommended allowance of GB outs to the left side of the infield, but look at the distribution of balls into the outfield.  There's more balls being hit to the left side and hit for power to the left side than we normally see from Jeter.  Of the 12 hits Jeter has accumulated in the last week, 8 of them have been hit to left-center or left field.  6 of those 12 hits have gone for extra bases, and 5 of those XBH have been pulled to left, including all 3 of the home runs Jeter has hit in the last 5 games.

It would be easy, and logical, to chalk this small sample boost in pull power to good BABIP luck and pitcher error, and Jeter's homers in the last 2 days certainly look that way at first glance.  Hector Santiago left a changeup belt high and over the plate on Monday and Jeter just crushed it.  There aren't too many Major League hitters who aren't going to turn on a hanger like that and hit it square.  It's practically a BP pitch. 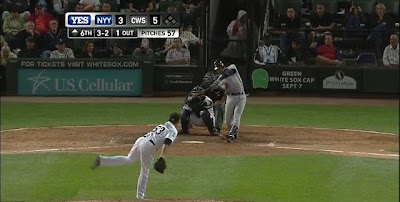 Francisco Liriano's first pitch to start last night's game wasn't much better.  The catcher set up inside and Liriano threw a belt-high fastball that leaked back out over the heart of the plate.  Jeter was looking fastball all the way and again he squared it up and drove it. 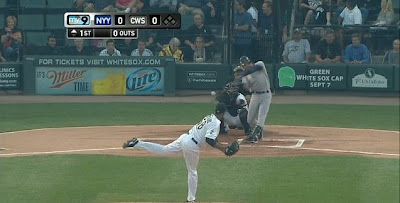 It's worth noting that both of these pitchers were left-handed, the variety of pitcher that Jeter still torches, but in looking at the pictures above and watching the video replays of the home runs, there does appear to be changes in Jeter's approach and swing mechanics.  On both swings he gets his hips cleared through the zone very early and pulls his hands in at the point of contact, allowing himself to drive the ball into left.  Jeter is intentionally swinging to pull the ball.  The pitch from Liriano is especially telling when demonstrating Jeter's conscious pull approach in these at-bats.  A fastball like that is a pitch that Jeter will typically let get a little deeper in the zone and then drive to right for a double or a home run.  It's what we've seen him do for years.  Yesterday, he got out in front of it, drove it to left, and appeared to be doing it deliberately.

I'm not sure what this means or if it means anything at all.  I just know that I've been pleasantly surprised to see highlights of Jeter hitting home runs to left field consistently for the last handful of days, and if this is something that he's been working on in BP it makes him all the more dangerous going forward.  Jeter has proven this season that he's still got the contact skills and bat speed to be a threat at the plate, but his weaknesses to the pull side have still been present.  If Jeter can do enough to make pitchers think twice about pitching him to pull, and continue to hit a fair share to left with authority mixed in with the usual groundouts, that should spell good things for him for the rest of this season and beyond.
Posted by Unknown at 2:37 PM