Keith Law released his midseason top 50 prospect rankings list today, the update from his preseason top 100.  The lone Yankee representative was Aaron Judge, the 22-year-old outfielder who's made a lot of noise in A-ball this season after an injury prevented him from starting his pro career in 2013.  Judge has hit .321/427/.523 in 386 plate appearances, three-quarters of which were spent at Low-A Charleston, with 13 HR, 54 R scored, 61 RBI, and 59 BB.  He did not make Law's preseason top 100.

When describing Judge and his performance so far this season, Law had this to say:

"Judge is a beast at 6-7 and 230 (or more) pounds, but with a surprisingly short path to the ball for a guy his size and plenty of loft in his finish for power. He's also quite mobile for someone his size and should be an above-average or better defender in right, with plenty of arm to stay there as well."

Basically touched on all 5 tools in those 2 sentences and had positive comments about all 5.  Judge has impressed many with his patient approach and compact swing, potentially raising the ceiling of his hitting tool that had been in question.  Right now, he profiles as a guy who will hit for a lot of power, some average, and provide above-average defense, all things the Yankee lineup could use.  Law acknowledges this by saying Judge "could be the middle-of-the-order bat the Yankees have tried to develop for years."
Posted by Unknown at 4:46 PM No comments: 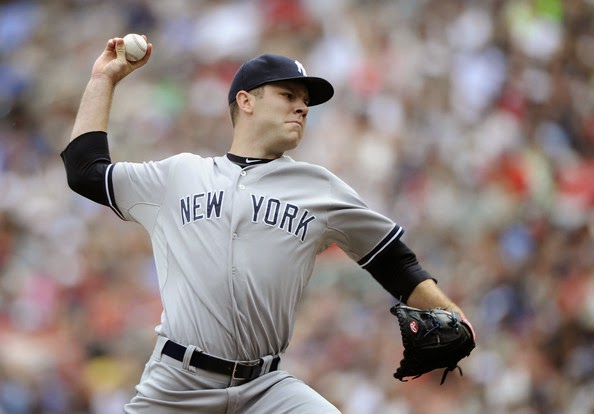 Talking about the need for Joe to make lineup changes is almost a dead horse topic at this point.  He's fiddled where and when he could, but regular injuries and subpar performance have handcuffed any chances for real results.  He's not going to move Derek Jeter out of the 2-spot, he can't count on Carlos Beltran being a reliable run producer in the middle, and if he had somebody better than Ichiro to hit 7th he would be using him now.  The Yankee lineup is what it is.

Except for 1 easy and almost stupidly logical move that Joe can still make.  He could swap Jacoby Ellsbury and Brett Gardner in the batting order.  Ellsbury can go back and hit first like he was always supposed to, and Gardner, one of the hottest hitters on the team, can move down to a better run-producing spot in front of Teix.  Ellsbury's a better base stealer, Gardner has hit for more power, what is there to lose?  I doubt it's going to happen, but I'm rooting for it when the lineup card comes out tomorrow afternoon.

P.S.- For more on this topic, check out William Tasker's post from Tuesday at IIATMS/TYA.

Posted by Unknown at 9:10 AM No comments: