Spring Training is underway and I'm happy to have baseball back in my life, but I'm all about the hockey tournament right now.  Took another half-day today from work to watch USA-Canada and by the time this post goes up I'll either be well into drinking to celebrate the victory or ease the sting of the loss.  I'll turn my focus 100% to baseball when the tournament ends on Sunday.  Now onto the links!

- On Monday, SJK of NoMaas used the Craig Kimbrel signing as a reminder that the Yankees are being stupid by not doing the same with D-Rob.

- On Tuesday, Andrew Mearns of Pinstripe Alley discussed the awkward situation D-Rob finds himself in as an "unproven" closer replacing the greatest one who ever lived.

- Chad Jennings profiled Kelly Johnson and the work he's been putting in to prepare himself for the everyday third baseman job he's assumed.

- Roberto E. Alejandro of Respect Jeter's Gangster had the most succinct and spot-on take on the Cano-Long hustle non-story that I read all week.

- Greg Corcoran of Bronx Baseball Daily listed the 10 prospects who just missed making the cut for his top 50 for 2014.  Looking forward to seeing that list. That's a lot of prospects to keep track of.

- Daniel Burch of The Greedy Pinstripes continued his solid run of prospect interviews with the latest one featuring Staten Island pitcher David Palladino.

- On Thursday, Mike Axisa of RAB pointed out the flaws in the Yankee infield and in their approach to addressing them as they continue to not re-engage Stephen Drew.

- Dan Dechenaux of Yanks Go Yard found the one area where Carlos Beltran will be a big upgrade over Curtis Granderson.

- On Friday, el duque of It Is High... pleaded with Hal to get an early start on his international spending spree and sign 1 of the 2 Cuban players who the Yanks scouted this week.

For this Friday's jam we're going with a little Dio.  Win or lose in hockey today, Dio is always good post-game music. 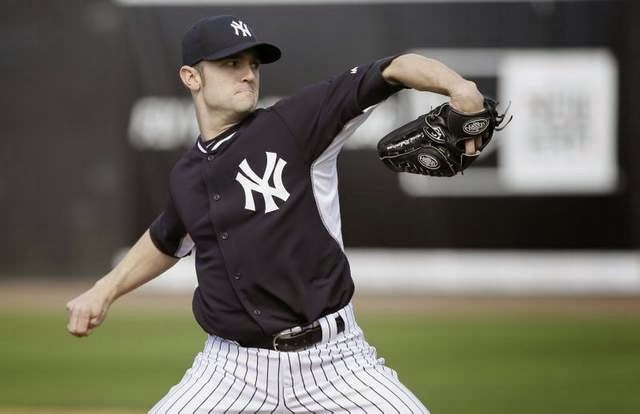 If there's one word that fits as a theme for the 2013-2014 Yankee offseason, it's turnover.  Almost every part of the roster experienced significant turnover from last season.  The infield has 2 new players at second and third base and a different starter at every position compared to Opening Day 2013.  The outfield also features 2 new players in right and center, and the one holdover is changing positions again.  40% of the starting rotation will be new.  The only part of the roster that hasn't turned over much is the bench, and unfortunately for those guys they're going to stand alone in that distinction as we wrap up this week-long review of the current roster state with the bullpen.

We knew the Yankees were going to experience a major change in the 'pen in 2014 the minute Mariano Rivera announced that the 2013 season would be his last.  When recent bullpen staples Joba Chamberlain and Boone Logan followed him out the door in free agency, the anticipated change became even greater.  Interestingly enough, the bullpen was the one area where the Yankees didn't aggressively attempt to rebuild through free agency, instead picking and choosing a few under-the-radar names to compete with their cache of young, homegrown arms for the open spots in camp.  Big names or small, young players or older, outside or internal, we're going to see a lot of new faces jogging out from behind the outfield walls this year, and we're also going to see the familiar ones in new roles. 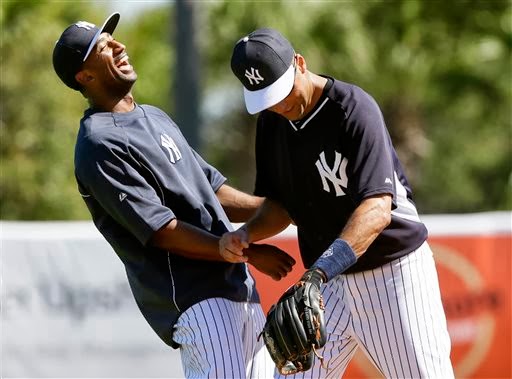 (Fielding errors are HILARIOUS!!  Courtesy of the AP)

The first full-squad workout was yesterday and there was lots going on.  Only a few more days before ST games start!

- Michael Pineda was the premiere bullpen session of the day.  He threw to Peter O'Brien, who gave a very positive report on what he saw.  Lot of that going around early in camp...

- Fellow 5th starter competitors Adam Warren and Vidal Nuno threw BP early in the morning.  There were a slew of other pitchers throwing live BP later in the day, most notably Preston Claiborne, Dellin Betances, and Jose Ramirez.

- Infield drills and BP groups were the major assignments of the day for the first workout.  Utility IF candidates worked at multiple positions.

- Derek Jeter told reporters he dropped a few pounds, down to 193 from his customary 199, to ease the strain on his legs.  Can't knock the logic there.

- Alfonso Soriano was out with the flu and could miss another day or 2 before he's ready to go.  Nothing serious, but enough to call him the first health casualty of the year.

- Guest instructors for the day were Willie Randolph and Hideki Matsui.  Lotta Japanese star power on display with Matsui, Ichiro, and Tanaka all together on the same field.