It's been a staple of the sidebar of this site for quite some time now, but it hasn't been officially recognized in over 5 months.  That "it" is the AB4AR Shit List, the running list of things Yankee-related, and sometimes not, that are pissing me off.  It's a representation of my more irrational fan side, and the more immature early days of this site, but it's something that everybody can relate to on a personal level, and even if it's a few days too late now that the Yankees have started to turn things around (today's game aside), why not finish off our weekend with a little bit of hatred, huh?  I know I could certainly stand to blow off a little steam.

Labels: #Sh*tlist, Adventures In Fandom, Blogging Under The Influence

Here's his combined line from just the 4th and 5th innings in those 2 starts:

Without trying to dig too deep into such a small sample, I'll just be broad and say that's pretty fucking terrible.  For 2 consecutive starts now, each and every one of Hughes' issues (inefficiency with pitches, failure to put batters away, predictable pitch selection, poor location) has come to the surface the second time he gets through the order.  That's just not going to get it done, by any measure.  4-inning starts are acceptable in the GCL, not in the Majors.  Clean it up, guy.  That's a piss poor effort. 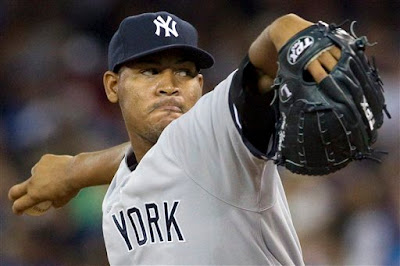 - Jeter's RBI double in the 6th gave him 150 hits for the season for the 17th straight year, tying the MLB record for most consecutive 150-hit seasons with Hank Aaron.  Regardless of what anybody thinks about Jeter, that's an impressive record.
Read more »
Posted by Unknown at 7:16 AM No comments: