I don't have much to say today, people.  I'm tired, I'm cranky from a long week at work, I haven't slept particularly well all week, and all I want to do right now is get the hell out of my office so I can go watch "The Dark Knight Rises."  I honestly debated whether or not to wear my Batman t-shirt to work today to honor the occasion, and I plan on marking out really hard when I'm in the theater tonight.  I am such a child.  Onto the links!

- On Monday, William Juliano of The Captain's Blog attempted to educate the Yankee masses on the flawed logic in constantly booing A-Rod.  I was going to write something up on this same topic on Monday night.  After reading William's take, I'm glad I didn't; I couldn't have said it any better.

- On Tuesday, Matt Keegan of Pinstripe Alley examined the maturation of Corban Joseph's game that has led to his great MiL season.

- Vizzini of NoMaas offered a reminder of how the last couple Yankee trades worked out to put the upcoming deadline into perspective.

- On Wednesday, Greg Corcoran of Bronx Baseball Daily commented on the starting pitching logjam at the lower levels of the MiL system.  You can never have too much starting pitching, right?

- Mike Eder of TYA analyzed CC's first start back from the DL with the PITCHf/x microscope and showed that the results were positive.

- On Thursday, el duque of It Is High... listed the top 10 moments in Darnell McDonald's long and storied Yankee career.

- Steve Goldman of Pinstripe Alley peered into the future to talk about what the Yankees can/will do to replace Nick Swisher.

- Chris Carelli of Yanks Go Yard discussed the solid all-around production coming from the Yankee bench recently, and the benefits of that production.

- William Tasker of IIATMS weighed the "Garcia or Phelps" options after Freddy's most recent rough outing in Oakland.

- Chad Jennings of LoHud broke down the current situation in left field with Brett Gardner now looking like he's going to miss the rest of the season.

For the Friday jam, we're going with some Rage Against The Machine.  If there's one band that I want to see officially get back together and record a new album, it's Rage.

Enjoy your weekends, everybody.
Posted by Unknown at 12:39 PM No comments: 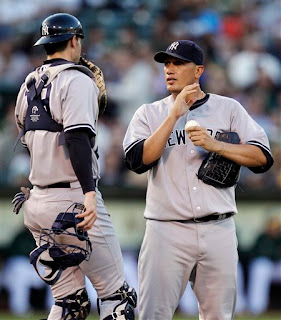