Looks like all that working out while watching the replay of your Game 3 meltdown against the Angels didn't do shit, huh?  Unless you count mastering the ability to repeat that meltdown over and over again.

Even in just the 3rd game of the year, there is something so gratifying about watching Papelbon have to give up the ball and walk off the field with his head down.  If I had a magic lamp with a genie inside, my first wish would be to have the ability to conjure up that image of a beaten and defeated Papelbon whenever I wanted.

** Check back for series recap and early snap judgments tomorrow morning. **
Posted by Unknown at 10:15 PM No comments: 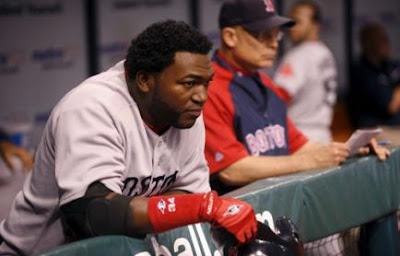 In case you haven't noticed, The Artist Formerly Known as David Ortiz is 0-7 in his first 2 games of 2010. But when that fact was mentioned to him after last night's game by reporters, he brushed it off as nothing to worry about.

"You guys wait till [expletive] happens, then you can talk [expletive]. Two [expletive] games, and already you [expletives] are going crazy."

There you have it. Just vintage Big Sloppi right there. The same cheerful, carefree attitude that endeared him to Red Sox fans and baseball fans nationwide back when he first joined the team in 2003 and put up gargantuan, steroid-inflated statistics to lead to the Sox to 2 fraudulent World Series titles.

Good to see he hasn't lost that childish love for the game and isn't feeling any pressure to rebound from last season's diminished numbers that almost assuredly signaled he was finally off of performance-enhancing drugs and was now exposed as an older, slower player whose natural hitting skills were never that great to begin with.

I mean, if Ortiz was upset about his slow start he probably would have lashed out at those reporters in a profanity-laced tirade full of F-bombs, Mother F-bombs, S-words, and who knows what else? But no, that's not the David Ortiz Way. He's just going to stay positive, stay focused, and go about his business with a smile on his face the same way he's done for the last 7 years. And at the end of the season, when he's hitting .215 with 18-22 HRs, 70 RBIs, and a category-D OPS, all those reporters are going to feel pretty stupid for ever questioning Big Sloppi this early in the season.
Posted by Unknown at 2:25 PM No comments:

Well it wasn't pretty last night, but a win's a win. Some thoughts:

- Even after just 2 games, Robinson Cano looks better at the plate than he ever has to start a season. He has perfect balance to his swing and is seeing the ball well, both good signs that point to him having a productive year from the 5-spot since it usually takes a month or two for him to hit this well.

- Not a bad start for A.J. He was in and out of trouble all night, but also didn't get any help from his defense with 3 errors. In the 4th and 5th innings especially he showed the ability to bear down and make pitches, something that is always difficult to predict with him. 94 pitches in 5 innings isn't exactly economical, but it was still a better start than CC had on Sunday. And he and Jorge got along; all together now; "Awwwwwwwwwwwww!" 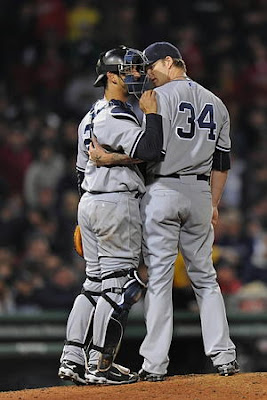 - I complain about Marcus Thames being inserted into the lineup for Gardner in just the second game and he gets a walk and a strikeout, ho-hum.  When you're right, you're right.

- Very solid 2 innings from Ace. Those innings were big considering Chan Ho Park was out with a severe case of "Joe probably didn't want to use him in a high-pressure situation again after he shit the bed on Sunday night" AKA "the flu" and it was good to see Ace work multiple innings and throw a decent number of pitches to test his back.

- Joba?! There you are!! Hadn't seen you in a while, buddy. How ya been? You gonna stick around for a while?

- I've said it before and I'll say it again, nobody in the Boston bullpen scares me. If you can get their starters out early, you can do damage against anybody in that 'pen
Posted by Unknown at 9:48 AM No comments: