It's my birthday on Monday.  For the first time in my life I don't really give a shit about it.  There's nothing fun, exciting, or special about turning 28.  It's just clicking another year off.  But I am flying back to CT to spend the Thanksgiving week at home and that's always a good time.  I get all the east coast beer that I can't get out in Wisconsin back, I get Francesa on the YES Network back, I'm going to the Rangers-Canucks game next Saturday, and I get the luxury of having the entire week off from work to sit around and do nothing.  Hopefully a noteworthy thing or 2 happens while I'm home so I have something good to blog about.  Now onto the links!

-  On Monday, Michael Eder of IIATMS/TYA profiled free agent outfielder Jacoby Ellsbury.  He hasn't been talked about a lot, but he could be a better fit for the Yankees than people realize.

- On Tuesday, Brandon Mauk of The Greedy Pinstripes identified the cheaper free agent options that would make a lot of sense for the Yankees this offseason if they can't afford to shop hard for all their top targets.

- Craig Edwards of Pinstripe Alley discussed the idea of Brendan Ryan getting the bulk of the shortstop playing time over Jeter next year.

- On Wednesday, Vizzini of NoMaas went way off the free agent radar to find some starting pitching options that could work for the Yankees.

- El duque of It Is High... lamented the Randy Levine-heavy week we had to endure this week.  I hear that, Duke.  I hear that.

- SG of RLYW released the first round of MLB standing CAIRO projections for 2014.  Not a lot to be taken from it this early in the offseason, but another way to show how much work the Yankees have to do.

- On Thursday, Jonathan Aron of Yanks Go Yard kicked the tires on Scott Kazmir, one of the top low risk/high reward starters on the market.

- Mike Axisa of RAB looked back at the 2013 draft and declared it one of the strong points of the 2013 Yankee season.  That should spell good things for the farm system next year, right?

- Chris Mitchell of Pinstripe Pundits examined the possibility of David Phelps becoming a reliable part of the rotation next season.

- On Friday, William Juliano of The Captain's Blog broke down the arguments against re-signing Robinson Cano to point out how flawed they are and make the point that the Yankees can and should re-sign him.

This week's jam is "Do I Wanna Know?" by Arctic Monkeys.  Was going to go see them next month in Milwaukee but found out the show is already sold out.  Balls.

40-Man Moves Could Signal The End Of Nix, And Maybe Nunez

If you didn't get all jazzed up at the announcement of the 40-man roster moves on Wednesday, don't worry.  I didn't either.  It went almost exactly as expected, with the Yankees protecting Gary Sanchez, Slade Heathcott, Shane Greene, Bryan Mitchell, and Jose Campos from next month's Rule 5 Draft by adding them to the roster and leaving their Rule 5 eligible relievers unprotected.

The one unforeseen move was made via trade, a small trade between the Yankees and the Padres for MiL utility infielder Dean Anna.  Anna is a 26-year-old lefty hitter who can play all over the infield and some of the outfield, with his primary positions being second base and shortstop.  He was hardly a prospect in the San Diego system, but the guy does appear to have some tools.  He hit .331/.410/.482 (.400 wOBA) in 582 Triple-A plate appearances last year, he's always had strong K and BB rates, and he's got enough gap power in his bat to conceivably be a useful bench player.  He came at the expense of High-A pitcher Ben Paullus, which is to say the Yanks basically got him for free, and his immediate addition to the 40-man is another harrowing sign for some of the Yankees' incumbent infielders. 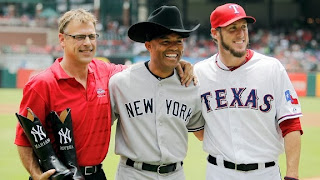 We knew the Yankees were going to be in the market for bullpen help this offseason, and according to multiple reports they're starting their search at the top with Joe Nathan.  It was reported last Sunday that the team had been in contact with Nathan about replacing Mariano Rivera, and Mark Feinsand confirmed that yesterday with a report of his own.

Nathan, who I talked about earlier in the week, is the premiere free agent closer on the market this offseason.  He turns 39 today and is coming off an excellent season closing in Texas (2.26 FIP, 43-46 saves in 64.2 IP), so he should be looking for a multi-year, big money deal and he'll probably get it.  Feinsand's report mentioned that the Yankees were going to focus on other areas of need before looking for bullpen help and that's the right strategy to take, particularly with Nathan.  The money he's going to command could be the difference between signing someone like Brian McCann and not, and bullpen help can be found for much cheaper.

He's an ideal late-game arm to add to next year's 'pen, but I wouldn't expect Nathan to end up in pinstripes when all is said and done.

While it looked like the stage was set for more shenanigans after Wednesday, Alex Rodriguez stayed true to his word and did not appear at yesterday's hearing session for his suspension appeal.  With him no longer participating and Bud Selig staying away, the hearing concluded yesterday and now everything is in Fredric Horowitz's hands to make his ruling.

Initially it was reported that Horowitz would have 25 days to render his decision, putting him on a December 16th deadline.  T.J. Quinn of ESPN had differing information yesterday, however, reporting that both sides have to put together summary briefs and submit them to Horowitz before his 25-day countdown can begin.  The deadlines for the brief submittals and responses are December 11th and 21st, and only when those requirement have been met will Horowitz start working on his decision.

This pushes the schedule way past the Winter Meetings and possibly out into January, which is not good news for the Yankees.  Given how aggressive they've been on the free agent front since start of the offseason, I have to think they're anticipating the suspension being upheld, or at least reduced to a number that still keeps A-Rod's money off the books next year.  Guess we'll just have to wait and see.
Posted by Unknown at 7:32 AM No comments: