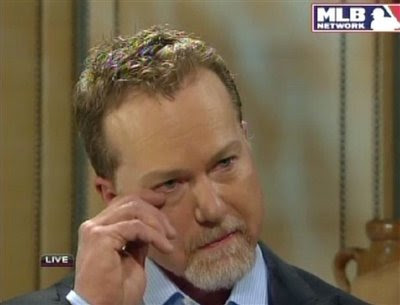 Mark McGwire finally admitting he did steroids yesterday is hardly newsworthy. At this point, after his tight-lipped performance before Congress and his disappearance from the game altogether after his retirement, everybody knew his silence spoke volumes about his guilt as a steroids cheat. The fact that SportsCenter basically focused wall-to-wall coverage on this was ridiculous and downright boring. What is newsworthy, however, is the way in which he went about "admitting" his wrongdoings yesterday and how insincere and insulting it was to baseball fans and to the general public.

From Tim Kurkjian to Tony La Russa to Bob Costas, we were inundated yesterday with first-hand, direct accounts of what McGwire said and how he felt about this whole situation. And all those accounts lead to the exact same conclusion: Mark McGwire was a lying, cheating scumbag back then, and he's still a lying, cheating scumbag now. Even when he was supposedly being honest and admitting what he did, that honesty was shrouded in a black veil of untruths and excuses most likely designed to fool us but succeeding in fooling only himself.

For starters, the "nothing for hand-eye coordination" and "God-given talent" arguments are completely bogus. Anybody that read "Game of Shadows" or has followed the baseball steroid scandal knows that part of the reason HGH is so popular is because in addition to building muscle mass and helping recovery time, it also helps improve vision, reaction time, and hand-eye coordination. Ichiro Suzuki has great hand-eye coordination; Derek Jeter has great hand-eye coordination. That is reflected in their consistently high batting averages throughout their careers and their ability to hit the ball the other way better than anybody. McGwire's low batting average and high strikeout totals point to him not having good natural hand-eye. When you consider that McGwire ended his career with a less-than-stellar .263 BA and his BA numbers had bottomed out before he started using steroids and then increased steadily through the prime of his playing (and juicing) career, it's safe to say that there was definitely something involved in improving McGwire's hand-eye. And that something sure as shit wasn't God or more time in the batting cage.

The "health reasons, not strength reasons" and "'roids don't help you hit HRs" arguments are the real doozies, though. McGwire stated that he wanted to stave off his injury problems so he could play more games, not hit more home runs. When you're injured, you can't play; when you can't play, you can't hit; when you can't hit, you can't hit home runs. So when you can't play, it goes without saying that your HR totals are going to suffer as a result. By taking steroids and HGH and whatever else, you allow yourself to recover faster and/or prevent injuries, thus allowing yourself to play more. Just by being on the field and at the plate more, one is going to accumulate more HRs through the law of averages. So yes, Mark, your steroid use was a direct cause for your higher HR numbers just by giving you the ability to play more.

Furthermore, just by nature of the definitions of the words, one can be considered "stronger" when "healthy," so by taking steroids to make your body healthier, you are, in effect, making yourself stronger too, and that's before you even get into the massive transformation they did to your body by adding the noticeable tons of muscle mass. You think having all that beef helped jack a few more fly balls out of the park that otherwise wouldn't have gone out if you were left to your God-given crappy hand-eye coordination? I think so.

McGwire's statements yesterday were far more damaging that anything he said or could have said in front of Congress a few years ago. Before yesterday afternoon, people had pretty much forgotten about the guy. He had vanished from the public eye and nobody anywhere was clamoring for news on McGwire or calling for him to admit his guilt. Then he decides to thrust himself back in front of us all and insult us by making all these idiotic statements, assuming that everybody who cares is still completely in the dark about steroids, their effects, their side effects, and still naïve and stupid enough to believe the "hard work, first-in/last-to-leave, drink your milk, take your vitamins, say your prayers" bullshit that he was passing off as the real cause for his success. He failed to realize that we are all way past the "Fool me twice, shame on you"-stage in the steroids era, and failed to realize that everybody watching his interview and listening to other people's accounts of their discussions saw right through his bullshit. He would have been better off going on the MLB Network and slapping Bob Costas across the face, turning to the camera, injecting himself with a syringe full of deca-durabolin, and saying "Fuck you, America."

I was a big Mark McGwire fan back in the day. I can still remember being 12 years old in the summer of 1998, watching he and Sosa battle back and forth and hit baseballs farther than I had ever seen. One of my fondest memories for a long time was the night he broke Roger Maris' record; I had just gone to bed when my Dad came upstairs to tell me Big Mac was up again if I wanted to watch. I ran downstairs just seconds before he lined that frozen rope that barely made it over the wall and stood there for what seemed like an eternity watching the celebration unfold and thinking to myself that I had just witnessed something incredibly special, never once even stopping to look at how insanely and unnaturally muscular McGwire and Sosa were. Now I, like many other baseball fans my age, watch those highlights and laugh at being so stupid, but also feel a bit bad about how we got sucked in and tricked. Even now as I sit here writing this, I can't help but feel a little hurt now that I now know the ugly truth about someone I revered.

And that's why yesterday was newsworthy. Not because McGwire finally outed himself as a liar and a cheater, but because he went about it in a way that felt like he still believed we were all 12 years old and in awe of him and were going to shower him with forgiveness and praise for his honesty. Instead of lowering himself to our level and being a regular person, he still tried to pass himself off as someone and something great.

So go ahead and cry your crocodile tears, you son of a bitch. You aren't fooling anybody. Your family and friends might accept your admission and apology, but I don't and I'm sure there are millions more fans like me out there who don't either. If you would have just stayed away, maybe you would have stood a chance of gaining back some recognition and reverence in the long run. But you had to come back and put on your little show yesterday, and because of that your reputation will remain in tatters in the minds and hearts of all baseball fans who truly care for the rest of their lives. Even in your locker room this year I bet there will be players who will stand there and nod and agree with you to your face but secretly despise you for what you did and how you tried to justify it. And because you chose to be dishonest about being honest, that's what you deserve.
Posted by Unknown at 1:00 PM 1 comment: