How do ya like them apples?!?!?!
First The Fucking Horse goes yard to tie it up and then Marcus Thames makes Papelbon pay for daring to cross Dark Helmet and a great game that turned into a horseshit game ends up being a great game again all in 4 hours.
Yep, just Yanks-Sox baseball.  What else is new?
Nothing is better than watching Jonathan Papelbon blow saves.  Except watching him blow saves to the Yankees.  Seriously, nice location on those fastballs, bro.  Gardner slapped your shit into left, Teix almost parked one, The A-Horse demolished one, and Thames' was a no doubter as soon as it left the bat.  What a fucking toolbox.  Have fun watching this videotape over and over again you piece of trash.
BAHAHAHAHAHAHAHAHAHAHAHAHA!!!!!! 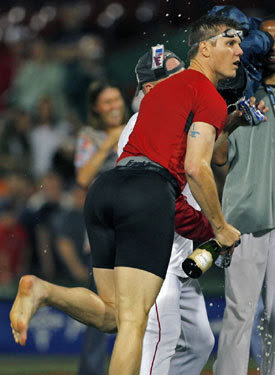 This Guy Is Ready For Yanks-Sox Tonight

I mean sure he's a complete freakshow and probably has no clue what the hell is going on in whatever game it was in which he was cheering/spazzing out this wildly.  But at least he's wearing a legit Red Sox jersey, not those green and pink abortions that everybody else in Fraud Sox Nation tries to pull off.

I'm just kidding.  This guy is a complete jackass.  Yelling and screaming wildly like it's Game 7 while his team continues to stumble its way to an 83-79 season.  Good luck with that, bro.

Fuck that guy, fuck the Red Sox, and fuck the rest of their lamesauce fanbase.  Give me the bleacher creatures doing the Yankee roll call and Freddy Sez the frying pan guy all day.
Posted by Unknown at 1:21 PM No comments:

Here's a beauty from Larry's "end of the world" take on the Yankees' loss yesterday:

"Instead of going into these next seven games against the Red Sox, Rays and Mets as an all-powerful 25-12 behemoth able to leap tall buildings and all obstacles with a single bound, they're a 24-13 second-place team that needs more help from its marquee players than its been getting." (courtesy of The NY Post)

Larry, you've got to be kidding me, right?  25-12 makes the Yankees a behemoth and 24-13 makes them nothing?  You forget, dear Larry, that even if the Yankees would have won yesterday and ended the week at 25-12, THEY STILL WOULD HAVE BEEN IN SECOND PLACE!!!!!!!!!!!!!!!!!!!!  Yesterday's loss did nothing more to change the Yankees than any of the other 13 they have this season.  It was a shitty loss, but it was a freak loss that more than likely won't happen again this season.  If you're looking for a team to fold its sails and wither and die because they lost a tough game at home, go cover the fucking Mets.

In your attempt to spread doom and gloom throughout Yankeeland, you actually proved just how strong the Yankees are.  They have been ravaged by injuries in the last month, are piecing together lineups day by day, are juggling their rotation to keep Javy Vazquez away from anything even remotely resembling a pressure situation and heaping more responsibility on their 23-year-old 5th starter who is working on an innings limit this year, they didn't get much from Teix and The Horse in April, they haven't gotten anything from Jeter and Cano in May, and yet they are still 24-13 and in second place in what is the strongest division in baseball.

In other words, THEY'RE FINE!!!!  Teix and A-Rod are coming around, Jorge is mashing since getting back into the lineup, and Jeter and Cano are going to start hitting again eventually.  When all these marquee guys do start to come together and produce, the Yankees are going to steam right by the Rays and start pulling away with the division.

But I'm sure when that time comes, Larry will have something  else to complain about, like maybe how the Yankees ONLY have 3 guys in the top 10 RBI leaders, or ONLY have 8 All-Stars, or are ONLY a team 25 games over .500 instead of being 26 over if they wouldn't have lost to the Twins on May 16.
Posted by Unknown at 9:50 AM No comments: