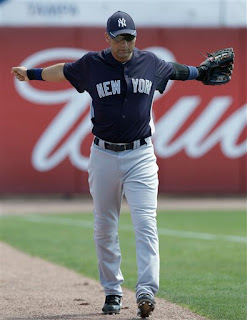 We kick off the 2012 season preview today with the knowns and unknowns surrounding the infield.

What We Know- Who The Usual Suspects Are

For the 4th straight year, the Yankees will open their season with the same quartet starting around the infield. And while they aren't as sure a bet to be named the hands down best infield in baseball as they were a few years ago, there's still plenty of hardware spread around the dirt that opposing teams and opposing pitchers have to respect. Offensively, these four will continue to be the driving force of the Yankee attack, occupying 4 of the top 5 spots in the lineup. Defensively, despite Jeter's continuing issues with declining range, this group still boasts two of the best in the business at the corners in A-Rod and Teix and a Gold Glover at second in Robbie Cano.

This group is coming off a season of mixed results last year, some having better numbers than were expected, some having worse, and some sitting right about where they were expected to be. With some of the team's older players located in the infield, there will be concerns about injuries and age-related decline in 2012, especially on the left side with Jeter and A-Rod, both of whom spent time on the DL last year. On the right side, the questions are a bit fewer and the concerns are a bit smaller. Teix is still an above-average power hitter and run producer in the middle of the lineup, but his overall hitting profile was brought into question after a 3rd straight season with declining BA/OBP/SLG numbers. Cano is the constant amongst this group; always on the field and always contributing.

Maybe Jeter Should Hurt His Calf All The Time

He suffers a calf injury this spring, misses a week, comes back and hits 3-5 with a HR and a double in his first 2 games back.

Maybe the Yankee training staff should get Jeter on a calf straining regimen for the season.  Every 4-5 weeks or so have him strain the calf, take 7-10 days off to recharge, and then come back to the lineup well rested and mashing.  If it leads to production like he put up in the second half of 2011 and more Jeterian HR swings to the opposite field like we saw yesterday, I'm all for it. 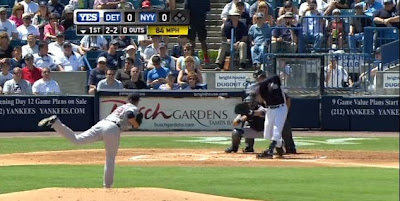