Yankees Already In On Cespedes?

It's not every day a team sends its pro scouting director, VP of baseball ops, a special assistant, and 2 top scouts to check out an international prospect, even one with a promotional video as sick as Yoenis Cespedes.  Are the Yankees this ahead of the game during Hot Stove Season again?  And did they manage to get ahead on this guy without Cash's involvement?

The Yoenis Cespedes Video That Everybody's Talking About

I don't know how or why this video was made, and I don't care.  This is "Yoenis Cepedes: The Showcase," a video put together to demonstrate the talents possessed by the aforementioned Cepedes, the latest mystery Cuban defector who is blowing up the baseball world and blogosphere right now.  I don't know how long this video will stay up, but check it out if you have the time.

If this does get taken down, or you just don't have the time to spend the whole 20 minutes watching the thing, all you need to know is that it's the best promotional video in the history of promotion.  And here's why.  This 20-minute video features:

- A patented Barry Bonds "stand and walk down the line" home run trot by Cespedes.

- "Indiana Jones"-style red line map traveling showing his movements from Cuba to the DR to the US.

- A workout montage soundtrack that includes "Ignant Shit" by Drake, "Look At Me Now" by Chris Brown, "The Whistle Song" by Juelz Santana, and "On To The Next One" by Jay-Z.

- An impressive series of 45" standing box jumps complete with a Usain Bolt pose and multiple crosses and chest pounds.

- A behind-the-back catch on a pop fly hit to him in the outfield as a demonstration of defensive skill.

- Some kind of standing sit-up exercise designed to showcase "core power" that ends with Cespedes repeatedly shoving his junk in the dude holding his feet's face.

- Some of the worst weight lifting form I've seen since Frank tried to teach Sweet Dee how to dead lift on "Always Sunny."

- A shout out to his mom, a former Olympic softball pitcher, with canned cheering and applause added in.

- And a finale that shows Cespedes and some other dudes roasting a whole pig on a spit.

Now the video doesn't do much to showcase Cespedes' overall baseball skill set (unless the behind-the-back catches qualify as Gold Glove worthy), but I don't give a crap.  Here's what we know about this kid.  He's 26, he's an outfielder, he played for Cuba in the most recent World Baseball Classic, he set his Cuban league record with 33 HR in a season, he's looking for an Aroldis Champan-like contract, and he's got the coolest group of handlers and PR people in the history of the world.

Seriously, I need whoever put this video together to do something like that for me.  I'm talking slo-mo shots of me banging out emails at my desk while "Types 100 Words Per Minute" flashes across the screen with "Swagga Like Us" playing in the background, highlights of me holding office doors open for women with an arm full of papers, stats of how many cups of coffee I drink per day, and shots of me crushing beers on my couch while "No Core Strength... But Tremendous Alcohol Tolerance" scrolls the bottom of the screen.

I don't know if this kid is legit or not.  I don't know if the Yankees have any kind of serious plans to pursue him or not.  But I do know that this video is one of the most enjoyable 20 minutes I've spent watching YouTube in a long time. 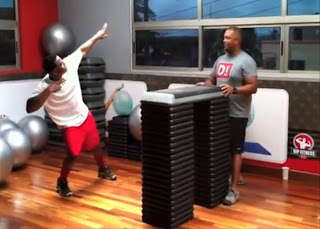 **UPDATE- 12:44PM- According to Ben Badler, the Yankees held a private workout for Cespedes yesterday.  Interesting... ** 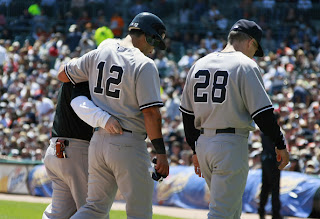 (Walk it off, big guy.  Courtesy of Getty Images)
I mean real deep.  This time last month he was reportedly "leaning heavily" toward retirement after another season affected by injuries.  And then just a few days ago, there was talk from his agent that Eric Chavez was now not so sure about his retirement intentions and that he would "deeply consider" a return to the Yankees if they were interested.  While these statements from Chavez open up a possible line of discussions related to just how spiritual he is with all this deep thinking and which Tool album Chavez prefers, they also raise a more relevant one relating to whether or not the Yankees should consider bringing Chavez back in 2012 if he truly still wants to play.

After quickly becoming one of the best third baseman in the AL early in the 2000s and enjoying a string of success from '01-'06 that included 6 straight Gold Gloves and a Silver Slugger Award in 2002, Chavez's health began to betray him in 2007 and he has never been the same player since.  He was basically a scrap heap addition by the Yankees before the 2011 season, following the "cheap diamond in the rough" approach they took to signing Bartolo Colon and Freddy Garcia to help fill their roster needs.  There was some buzz generated when Chavez hit well in Spring Training and looked much smoother at the plate and in the field than he had in years thanks to his back finally being healthy.  But the injury bug hit him again in May when he went down with a broken bone in his foot that he suffered running the bases, and Chavez struggled through the rest of the season after missing 2+ months.

A quick glance at Chavez's stats from 2011 leaves little to be excited about.  He only played 58 games and only had 175 plate appearances in those games.  His .263/.320/.356 line shows that Chavez can still work a count and put some swings on the ball at age 33, but that he has very little power and speed left in his bat to do much damage.  Of his 42 hits on the year, only 10 went for extra bases and only 2 of those for home runs, good for a .094 ISO and a .294 wOBA.  Those values are among the lowest of Chavez's career, keeping up with the downward trend he's experienced over the past few seasons, and they speak to Chavez being nothing more than a bench-type player nowadays.

That being said, Chavez still managed to produce positive WAR, albeit just 0.6, in his limited action in 2011, thanks mainly to him still registering as an above-average defensive player and a solid baserunner (broken foot excluded).  And considering that Chavez being out of action led to more time at third base for Eduardo Nunez in 2011 after A-Rod got hurt, and exposed us all to the maddening experience that is watching Eduardo Nunez play the field, his solid defense should be a check in the "Pros" box for Eric.  The Yankees seem interested in teaching Nunez to play the outfield as a way to get him more playing time in 2012, which leaves the need for a backup at the hot corner intact.  Are we all sure that Brandon Laird can handle that responsibility or step in and contribute for extended periods of time if A-Rod goes down again?  And are we sure we want to leave the backup 1B role in the hands of Laird or (gulp) Jesus next year if something happens to Teixeira?

Between Nunez and Laird, the Yankees likely have their 2 backup IF spots covered for 2012.  The injuries and the lack of power make Chavez a very risky play with little potential for reward.  But, the injury Chavez suffered last year was not related to the back problems that ended his time as an above-average player, and if his foot injury didn't happen, perhaps Chavez could have produced better numbers as A-Rod's replacement last season.  If Chavez is serious about playing next year, takes enough time away from trolling the Radiohead fan message boards to talk about how introspective their new album is to stay in game shape, and is willing to accept another Minor League invite to camp in 2012, then I'd be open to bringing him back.
Posted by Unknown at 8:46 AM No comments: