Andy's return last week, Joba's potential demise this week.  I'm almost scared to think of what could happen next Friday.  On Joba, I've flip-flopped between loving him and hating him multiple times since he became a Yankee in 2007, and had gotten back closer to the positive side in the last year.  As much as I want to jump down his throat for being stupid and putting himself at risk of injury, I really can't knowing that it happened spending time with his kid.  As a single man with no children and no plans to have any, I don't feel it's my place to criticize someone for doing something with his son who he obviously loves.  Just an incredibly unfortunate break for Joba and hopefully he is able to make a full recovery.  On that somber note, onto the links.

- On Monday, Rebecca Glass of Pinstriped Bible touched on the impact Andy Pettitte's presence will have on guys like Adam Warren, David Phelps, their chance to make the show this year, and what the Yankees should do with them.

- William Juliano of The Captain's Blog wondered how Freddy Garcia fits into the Yankees' plans now that Pettitte is in the fold and suggested a very reasonable win-win trade scenario involving Garcia.

- On Tuesday, friend of the blog Rasheeda Cooper of Bomber Boulevard explained what each non-CC/Kuroda member of the rotation must do to follow Joe's "You have to produce" edict and not lose their rotation spot to Andy.

- On Wednesday, Trevor Wolff of Sliding Into Home came out with the most straightforward anti-Andy's return post I've seen yet.  As someone who feels similar and also doesn't want to see Andy handed a rotation spot on a silver platter, I applaud his candor.  Tip of the cap to you, Trevor.

- Matthew B of Yankees Fans Unite played the Over/Under game with Pineda and Nova for 2012.  This has been my favorite O/U post that YFU has done to date because what these 2 do this season will likely be the difference between the Yankee rotation being good or being great.

- Larry Koestler of RAB used the new and improved Brooks' PITCHf/x tool to break down Andy's last few seasons and project what he can do in 2012.

- On Thursday, Mike Ashmore of Thunder Thoughts examined the early season MiL home schedules to try to figure out when and where Andy will be pitching as part of his April ST schedule.

Also on Thursday, the other Matt from YFU, Matt S., had a prospect profile on lefty pitcher Nik Turley, which featured my sleeper write-up on Turley from TYA Prospect Week.  Thanks for the shout out, Matt.

- New addition to the Bronx Baseball Daily team Curtis Clark thinks Teix is due for a big comeback season in 2012, and goes so far as to throw the MVP award into the discussion.

- On Friday, Casey of Bleeding Yankee Blue asked what everybody thought the starting rotation should be this season.  His choices- CC, Kuroda, Pettitte, Pineda, Nova.

- Mark Feinsand of the Daily News has some sour grapes quotes from Bobby V on last night's game ending in a 4-4 tie.  I will say that it would have been a perfect opportunity for Joe to use Pat Venditte to keep the game going, but nobody told Bobby V to lay down a suicide squeeze play in a ST game.

- Tamar Chalker of IIATMS has been rolling through season previews for each Yankee MiL affiliate this week, and he saved the best for last with the preview for Low-A Charleston.  If everybody plays up to their potential, that's practically a Low-A All Star team.

- From the TYA team, on Thursday, Eric Schultz profiled Dominican prospect Rafael DePaula, who finally got his US visa yesterday and can now begin his Yankee career.  Very little is known about DePaula but he's a big, 21-year-old righty who can throw high-90s.

- Matt Imbrogno looked at Pineda's 2011 monthly fastball velocity breakdowns to try and stem the ever-growing concern about where Pineda is sitting on the gun this spring.  The supposed fall-off from 2011, something that may be contributing to the negative hype this spring, was a bit overblown.

I had a song picked out for today, but it only seems right to play something for Joba so I'll call an audible and go with his entrance music.  Here's hoping this injury doesn't set back him for too long and we get to see him come jogging out to this again.  Get well, bud. 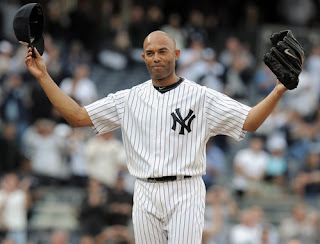 Details of the story are still coming in, but according to Jack Curry, Joba Chamberlain suffered a serious ankle injury yesterday and had surgery last night.  He's currently in the hospital recovering and is expected to miss significant time.

The injury was an "open dislocation" of his right ankle, which is basically the same thing as a compound fracture where there is bone breaking through skin.  He suffered the injury playing with his son at a children's play center yesterday.  There is no timetable for his return, but it doesn't sound like we're going to see Joba at all in 2012 and the injury could be career-threatening.  Cash said, “We’re worried significantly about him right now for him as an individual,” when asked to comment.

More details to come as they become available...

** UPDATE- 10:21 AM- Multiple tweets coming in from the Yankee beat reporters describe Cash as being very somber and visibly shaken when delivering the news on Joba.  Definitely not a good sign. **

** UPDATE- 11:18 AM- Via Kieran Darcy of ESPN, the injury will prevent Joba from putting any weight on his right leg for 4-6 weeks, after which a lengthy rehab will have to take place.  He's scheduled for an MRI and CT scan today to review the damage and results of last night's surgery.

This is just my speculation, but it doesn't sound like Joba will play at all in 2012.  When asked if the injury was career-threatening, Cash said, "I couldn't say, I just couldn't say. I'd like to say no. My heart and my gut tells me no, that's not the case."

** UPDATE- 3:43PM- Via Anthony McCarron of the Daily News: "Joba Chamberlain lost so much blood Thursday when he hurt his ankle while playing with his son that there initially was concern for his life, a Yankees' source said."

Jesus Christ, that is horrible.  Still no more news on the results of the tests today.  Given the nature of the injury, I would imagine some more surgeries may be necessary.