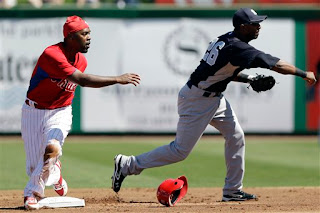 (It's a Swiss Eduarmy Knife.  Courtesy of The AP)﻿

We've reached the final piece of the 25-man puzzle for the 2012 Yankees, the bench.  The Yankees tried to build a mix of young internal pieces and cheap veterans last season and it worked out pretty well for them.  So as much as I was against holding out to spend less money on guys like Eric Chavez and his spotty health history again, and would have rather rolled with the young bucks in house, I can't really argue with the plan when it's worked for them before.  The 2012 bench will be comprised of mostly familiar faces, with one new surprise entrant included after yesterday's surprising catching moves.  There's flexibility in this group, and that's really the most important thing for the Yankees, as they aren't looking for consistent day in/day out production from anybody on their bench, but rather the ability to plug guys into spots for a day or 2 and keep their older veterans rested and fresh.

The first member of the bench is also the newest member.  For some reason the Yankees decided they weren't comfortable with Francisco Cervelli as their backup, even though he's held the role for the past 2 seasons, and so they brought in former MiL farmhand Chris Stewart.  Stewart is a defensive-only catcher and proved that last season in his first major chunk of Major League work, posting a .204/.283/.309 line, .259 wOBA, and 60 wRC+  in 183 plate appearances with the Giants.  He can take a pitch here and there but anything the Yankees get from him with the stick is gravy.  As a defense-only catcher, however, he is a very good one.  He threw out 28 of 72 attempted base stealers last season, good for 38.9%, and was ranked as the 15th best defensive catcher out of 114 last season by Beyond The Boxscore.  For all his offensive shortcomings, Stewart did rack up 1.2 fWAR last year in his limited work, and if he can quickly learn how to work with the Yankees' pitching staff he should be fine for the purposes of giving Martin a rest every now and then.

The 5 Most Important Yankees For 2012

A more appropriate title for this post might have been "The 5 Most Important Yankees For 2012 Besides the Obvious Choices."  We can all agree that CC is important because he's the ace of the staff and if he went down that would be a problem.  Same with Cano as the best hitter in the lineup or Mo as the closer.  I wanted to think outside that box a little and find the 5 guys on the roster who I think will make the difference between the 2012 edition of the New York Yankees being a good team and a great team; between losing in the ALCS and winning the World Series.  I'm sure there will be some disagreement with my choices, but these 5 guys are my most important Yankees for 2012.

The abundance of upper-level catching depth that the Yankees had last season has vanished with the retirement of Jorge Posada, the trading away of Jesus Montero, and the continuing back problems of Austin Romine.  Russell Martin's value to the team increased slightly with each of those occurrences, and now with the Yankees scrambling to replace the missing depth through minor moves he becomes even more important.  No offense to the Francisco Cervellis, Craig Tatums, or Chris Stewarts of the world, but if they are getting regular at-bats as part of an everyday Yankee lineup in place of Martin, that's not a good thing.  Martin is a former Silver Slugger at the plate and a former Gold Glove winner behind it.  He's familiar with everybody on the Yankee staff and looking to make a big splash in a contract year.  A healthy, productive Martin makes the lineup deeper and more dangerous, and the drop-off from his production to that of any of the current backup options is significant.

Jeter might be the biggest wild card in the lineup in terms of which way his production can go this season.  The way he finished 2011 has created elevated expectations for him this season, and he has looked good again at the plate this spring since coming back from his calf strain.  But don't forget that he was close to below average for the early part of last season, and history is working against him as a 37-year-old shortstop turning 38 in the summer.  A repeat of 2011's second half, or something close to it, would be great from Jeter.  It would create more RBI opportunities for the hitters behind him, inspire confidence that Jeter can at least remain serviceable through the end of his contract, and mask his defensive deficiencies to a certain degree.  A step back towards his 2010-early 2011 numbers makes that contract look worse and brings back the "Joe should move Jeter out of the leadoff spot" media frenzy that nobody wants to deal with.

Last 3 after the jump

Did I Jinx Cervelli Yesterday?

As Rob from Bronx Baseball Daily was kind enough to point out, I kinda blew my 25-man roster predictions yesterday.  The Phelps-over-Mitchell pick I can't get too upset about.  I know I'm more pro-Mitchell than most other Yankee fans out there.  But the Cervelli demotion for Chris Stewart was a complete shock to me, and after suggesting in the comments that I might have jinxed Mitchell, Rob hypothesized that I did the same thing to Frankie.

So Frankie, if you're reading this, I'm really sorry.  Seriously, dude.  I know I've bagged on you for not being able to hit, not being able to field, not being able to throw anybody out, and for wearing that ridiculous Great Gazoo concussion batting helmet, but you didn't deserve what you got yesterday and you have a right to be pissed.  Cash and Joe can say whatever they want about building depth and being solid at catcher from an organizational standpoint, but getting demoted for a guy with a .200/.273/.290 career tripleslash in the Majors is a pretty significant kick in the dick.  They did you dirty yesterday, and if I in any way contributed to that dirty deed, you have my apologies.  I'd much rather have you as the backup catcher than Chris Stewart. 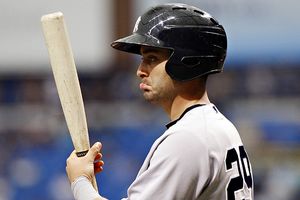 P.S.- I should probably get on that whole t-shirt design thing, huh?