From the Worldwide Leader in Fraud Sox Nut Hugging:

"The Red Sox offered reliever Mariano Rivera a two-year, $30 million deal and were prepared to non-tender closer Jonathan Papelbon, according to a baseball source with direct knowledge of the negotiations.

Rivera turned down the Red Sox to return to the Yankees, who offered the same money as Boston. Rivera's pending agreement with the Yankees was first reported by the New York Daily News."

BAHAHAHAHAHAHAHAHA!!!!  Are you serious, Red Sox front office?  Really, are you serious???  Let me get this straight.  You've had Daniel Bard wasting away as the setup man in your bullpen for the last 2 seasons while Papelbon continued to trend downward, yet you refused to trade him for something valuable while at the same time promoting Bard to the closer role.  You've refused to include Bard in any trade offers for anything that could have helped your team over the last couple seasons because you're so high on him as your future closer.  And now this story is coming out that your genius plan to help bolster the 2011 bullpen was to try to pry The Sandman away from the Yankees so you could non-tender Papelbon?  Do I have that right?

What kind of fake-ass reality are these clowns living in where they even thought they had a chance to sign Mo away from the Yankees?  This isn't some money-grubbing, Scott Boras-tainted free agent whore like Johnny Damon here.  This is Mariano Fucking Rivera.  The most famous pitcher in Yankee history and one of the most professional, most loyal people in sports.  You could have thrown a blank check, majority ownership in the team, and changed the name of the stadium to Rivera Park at him and he still wouldn't have signed.

Now all you've succeeded in doing is leave yourself exactly where you were last year with Crapelbon as the closer and Bard stuck in 8th-inning purgatory, only now you're going to pay Papelbon MORE money to continue to suck and you'll have pissed him off by going behind his back to get Mo and dump him AAAAAAAAAAAND pissed Bard off by going after Mo instead of promoting him to the role he deserves and has supposedly been groomed for.  Really inspires confidence in your players when you show you've got confidence in them.  But then again, what else would you expect from the guy who brought back Jason Varitek AGAIN instead of re-signing Victor Martinez?
Posted by Unknown at 3:49 PM No comments: 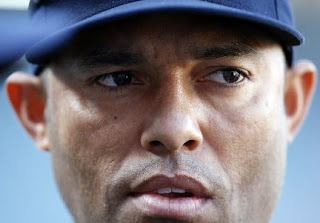 (2/ $30 mil for this guy?  Fuck and yes.)
On behalf of the Yankees, I'd like to apologize to the rest of the American League for the 9th-inning failures they'll have to continue to endure for the next 2 years.  I know it seems like this nightmare has been going on for 15 years already and it may never end, but know that someday it will end and you can go back to having hope for a late-game comeback, eventually.  Maybe.  Possibly.

Fuck, I don't know, Mo might very well be some kind of inhuman closer demon from Dimension X who will pitch until the end of the world.  In that case, I guess you're all fucked.  Sorry.