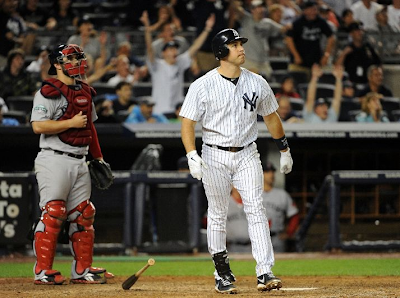 It was implied when Joe used him as a pinch hitter in the bottom of the 9th last night, and it was made official when tonight's lineup was posted.  Nick Swisher is back.  Not all the way back, as he's the DH tonight and not playing his usual spot in right field, but being healthy enough to swing the bat and run the bases is a step in the right direction and the Yankees could certainly use Swish back in the lineup to help lengthen it a bit.

The Bombers are looking to bounce back from last night's 9th inning disappointment to get the series win, and based on the way he pitched last time out, they've got the right man for the job in Hiroki Kuroda.  There's some weather in the area again, which is good if you're looking for a symbolic final cleansing of last night's loss but not so great if you're live blogging the game like me and hoping that rain delays don't drag this thing out until midnight.  Hopefully the heavy stuff clears through and stays away once the game starts.

First pitch is scheduled for just after 8PM Eastern/7PM Central.  Regardless of Mother Nature's cooperation in making that happen, I'll be back sometime right around 7 to kick this live blog off right.  Go Yankees!

Teix Turns His Swag On

The impact was felt only briefly, thanks to Curtis Granderson's Scott Smalls impression in the bottom of the 9th, but hands down the biggest moment of last night's game was Mark Teixeira taking Vicente Padilla yard one pitch after Padilla tried to clown him with a 51 MPH floater and then pimping the ever-loving shit out of it by standing and admiring the shot and doing the slow walk down the first baseline.

One of the biggest criticisms of Teix has always been that he's got the personality of a black-and-white photograph of a bowl of plain oatmeal, and it's a fair criticism.  The guy is a bit of a stiff.  So to watch him admire a home run in such an exaggerated fashion, a fashion that was almost as over-the-top as a Barry Bonds or David Ortiz performance, brought a smile to my face.  Teix has been having a great month, and he's going to be looked to even more with A-Rod on the shelf.

I don't expect him to step to the plate tonight with a bunch of gold Jesus chains on, or start his own series of complicated handshakes in the dugout, but it was good to see that Teix does have some personality in there.  In that moment last night, his swag was on a hundred-thousand-trillion and it was fucking awesome. 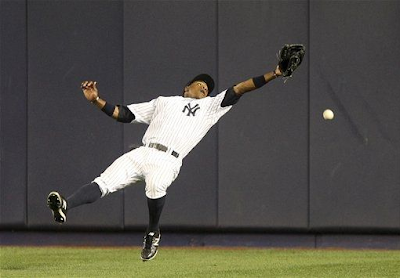 (Failboat.  Courtesy of The AP)﻿

On paper, this should have been a cake matchup for the Yankees yesterday.  CC Sabathia had been pitching pretty well since coming off the DL, Jon Lester had been pitching like absolute garbage for pretty much the entire season.  But as the old saying goes, that's why they play the game.  There was a pretty significant rain delay that pushed back the start of this game, and there's no way to know for sure if that had any effect on CC, but he was not sharp and put his team in a pretty big hole.  They managed to climb out, only to be kicked back down again in the 9th inning on one of the worst defensive plays you'll ever see.

- Sabathia struck out Jacoby Ellsbury to start the game, then gave up a bunch of well-struck hits that led to 3 Fraud Sawx runs in the top of the 1st.  The big hits were doubles by Adrian Gonzalez and Will Middlebrooks on 4-seamers that were up and over the plate.

- Lester looked good through his first 2 innings of work, but made a mistake in the 3rd, to Chris Stewart of all people, and Stewart hit his first home run of the season to make it 3-1 Bahhston.

- CC settled down and worked through the 4th inning without issue, but with 2 outs in the 5th his command started to elude him again.  He gave up a single to Pedro Ciriaco, walked Dustin Pedroia, and grooved a first-pitch slider that Gonzalez crushed for a 3-run homer and a 6-1 lead.

- The lineup quickly worked to pick CC up in the bottom half of the 5th.  Andruw Jones led off with a walk and came around to score on Jayson Nix's 2-run home run.  After another walk and an Ichiro single, Derek Jeter scraped another run across on a groundout and it was 6-4.

- Joe got one more inning out of CC then went to David Phelps in the 7th.  As he has done since being recalled, Phelps was fantastic in his 2 innings of work, striking out the side in the top of the 8th to keep the Yanks within striking distance.

- And strike they did in the bottom of the 8th, in one of the most badass ways imaginable.  Vicent Padilla was on to pitch, and after giving up a leadoff single to pinch hitter Raul Ibanez, he got to face his mortal enemy Mark Teixeira with 2 outs.

- After throwing an eephus pitch for a strike, Padilla tried to come back with a fastball 2-1 and Teix was waiting for it.  He launched it deep into right field for a game-tying 2-run homer and did his best Barry Bonds impression walking almost a third of the way down the first base line to watch it before starting his trip around the bases.

- The Stadium was rocking after the Teix bomb, but were quickly quieted in the 9th.  Rafael Soriano came on and walked Ellsbury with 1 out.  Ciriaco was up next and hit a line drive to center that Curtis Granderson couldn't have made a worse play on.  He came in first, then got turned around trying to recover, and fell on his ass reaching for the ball as it landed over his head for a triple.  It was a truly horrible play by C-Grand and after Ciriaco came home on a sac fly to make it 8-6, the Yankees' goose was cooked.