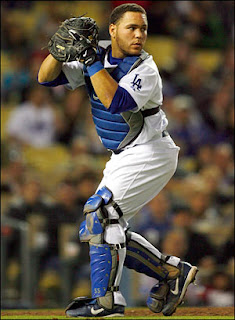 Now that the Russell Martin signing has been made official, the Yankee catching picture has become much clearer for 2011.  To start off the year, Martin will be the starting full-time catcher with Cervelli backing him up.  Jesus, previously promised a chance to compete for the job out of Spring Training, will start the season in Triple-A and most likely be a call up some time early in the summer.  With this new plan comes both good and bad and here's a quick breakdown of where the Yankee stand right now with their catching contingent.

He may  not be completely healthy and he may not be capable of producing at his All-Star levels of years past, but Russell Martin is a professional catcher with years of experience that should make him more than capable of playing in New York and handling this pitching staff.  We've already seen what Cervelli can do and we don't know anything about what Jesus can do, so to have a veteran on hand to help bridge the gap and maybe teach a thing or 2 to The Savior is a plus.

The argument for Cervelli getting playing time has always been that he's a better defensive catcher than Jorge.  2010 all but disproved that argument as Cervelli struggled at times to keep the ball in front of him and had a caught stealing rate right in line with Jorge's, which put them both firmly at the bottom of baseball in that category.  Martin has consistently been able to throw out guys at a 30% clip, give or take a few percentage points depending on the year and has always been considered a solid all-around defensive catcher.  With defense being the biggest question mark about Jesus, this is another area where Martin has the advantage.

While they didn't come into the season armed to the teeth at catcher, at least not at the Major League level, the Yankees have plenty of prospects.  The addition of Martin, while strengthening their 25-man roster, also allows them the option of starting Jesus in Triple-A again and starting Austin Romine in Double-A, thus giving them both more time to work on the holes in their game before moving up to the next level.  Also, with word going around that Jesus' slow start last year could have been attributed to the colder April temperatures that he wasn't used to, why not give him another year in the Minors to adjust his play to that and then call him up in the summer when the weather, and his bat, are both heating up?  Lastly, pushing Jesus back down provides him a chance to play everyday and better prepare him for the call up whenever it comes, which could be soon based on Martin's recent injury history.  For any situation that could come up, the Yankees are covered 2-deep at the dish now and that's certainly not a bad thing.

Let's be honest, Frankie Cervelli is not that good a baseball player.  God bless his heart, because I like the guy, but the more time he spends behind the plate and in the lineup, the worse off the Yankees are going to be.  If Martin goes down early and the Yankees decide Jesus isn't ready, that means Cervelli becomes the starter by default.  I think we can all agree that a combination of Martin and Jesus is more talented than a combination of Martin and Frankie, so to have Frankie still in the fold does weaken the overall 25-man roster a bit.

Going back to the point I just made about Frankie having to step in, the Yankees are at greater risk for injury at the catcher position with Russell Martin on the team than they would have been if he wasn't.  They just finally got done with having to deal with all of Jorge's bumps and bruises and sprains and strains over the last few years that led to more Cervelli time and now the Yanks could be heading down the same path with Martin.  He may not be completely ready to handle a full-time catching role in the Majors, but there's something to be said for having Jesus and Cervelli, 2 healthy guys, on call instead of one who could be constantly hurt.  Not to mention that every injury suffered by Martin or any of the others leads to the greater chance that Jorge has to strap on the gear again.  And that's just not something I want to see.

My biggest beef with the Martin signing is that I still see it as a possible sign that the Yankees are willing to include Jesus in a trade to bring in a top-flight pitcher to cope with losing out on Cliff Lee.  The good news is that those types of pitchers are quickly fading from the free agent and trade markets, especially today after Zack Greinke was traded to Milwaukee.  The bad news is that the longer Montero is not up with the big league club, raking and showing the Yankees why they were smart to not give him up for anybody, the longer he stands to be viewed as a "can't miss prospect" on everybody else's trade radar.  Part of me wishes Martin didn't sign just so the Yankees had to put Montero on the Major League roster and protect him from being traded for Adam Wainwright or Dan Haren.

So there's my take on the whole situation.  Overall I think the Martin signing was good for the Yankees because of the immediate depth and production improvements it gives them and the option to keep Montero and Romine down to hone their skills for a while longer it allows them.  But, if Montero does end up in another uniform before the 2011 season starts, you can forget everything I just wrote here.
Posted by Unknown at 10:03 AM No comments: