Raul Ibanez.  Eduardo Nunez.  Together.  In the same outfield.

May whatever higher power he believes in have mercy on Curtis' soul tonight in center field tonight.  Because I certainly don't expect Raul or Eduardo's gloves to.
Posted by Unknown at 3:41 PM No comments:

Cash Speaks On The Pineda Situation

I almost missed this late Friday, when ESPN ran a piece with some comments from Cash on the Michael Pineda trade and where everything sits now after the injury diagnosis.  Here are some of the highlights:

"Right now, our hopes and dreams for this player are in jeopardy.  Hopefully, someday, our fans will get to see what we expected to see from him for many years to come."

"This is a massive decision gone wrong right now.  So all scrutiny is fair."

"Our fans are right to be upset about this.  I'm devastated by it. I just hope everyone understands that every move I make is to improve this club, not hurt it."

Those are 3 very open, honest, telling quotes from Cash on how he feels about all of this, and I think they all point to something that's important to remember when discussing Cash's job performance.  He's not just some outside hired gun brought in to run the team, he's a lifer in the Yankee organization.  Cash built his professional career up to where it is within the Yankee family, so he's got a lot more invested in his job than just getting paid.  He cares about this team and its fans, and he WANTS to see the team win, as evidenced by this picture of him taking in yesterday's game with Bald Vinny and the rest of the Bleacher Creatures out in right field.  Can't imagine seeing too many other GMs out there doing that.

Every move Cash makes, whether it works out or not, is made with the goal of winning in mind.  When things go wrong, it probably hurts him personally as a lifetime member of the Yankee family just as much as it does professionally.  These quotes are a testament to that.  Cash is rooting for the team to do well just as hard as we fans are, and he's just as disappointed when things don't work out to that end as we are.  I'm sure this makes me come off as a Cash slurper, which maybe I am, and I'm sure it won't keep all the Cash haters from coming out of the woodwork and crucifying him for this trade.  But don't play this up like some kind of situation where Cash is Evil Vince McMahon intentionally trying to "screw" the Yankees out of their top prospects and into damaged goods.  He's a lifetime Yankee and this Pineda disaster is just as devastating to him as it is to us.
Posted by Unknown at 9:11 AM 1 comment: 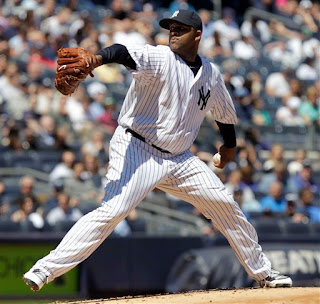