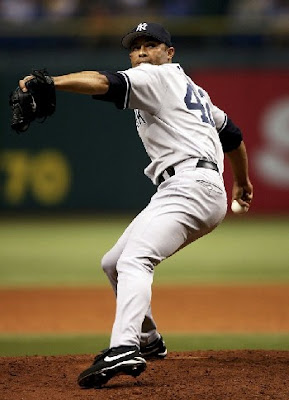 Just as sure as Derek Jeter was the player of the last decade for the Yankees, there's no doubt that Rivera was the pitcher of the decade.  If Jeter was the one constant in the revolving door that was the Yankee lineup then Rivera was the one defiant tree still standing through a swirling tornado of bullpen changeover, each season's staff looking almost nothing like that of the previous season.  Throughout the constant change and constant list of shitty setup men though, Rivera continued to quietly and ruthlessly go about his business, racking up hundreds of saves, shattered bats, and frustrated looks from those too helpless to master his cutter.

Over the past 10 years, Rivera's numbers look like this:

To call those numbers dominant would be the greatest understatement of the last decade this side of "George Bush didn't do such a great job as President."  Rivera was simply otherworldly in his brilliance, moving through what should be the prime and twilight of his career but somehow staying in his prime and extending it far beyond what any other pitcher can normally expect to do.  In a manner that goes even beyond Jeter's greatness, Rivera has become better and better at an age when most guys are moving into their 2nd or 3rd year of retirement and trying to get a job at ESPN.  And just like Jeter, Mo has always stepped his game up an extra level in the postseason.  I won't run through the complete stats for fear that I might cum my pants if I do, but over the past 10 years Rivera's playoff resume looks like this:

To quote the great Ron Burgundy, "These numbers look good, I mean really good.  Hey everyone, come see how good these numbers look!"  That's about as close to unhittable as a pitcher can get in an era that has been dominated by hitters.  If you factor out the fluke broken bat hits in Game 7 of the 2001 World Series and the bang-bang play at 2nd on Dave Roberts' steal attempt in the 2004 ALCS, these numbers look even better and we're sitting here talking about a guy with a spotless playoff record over 10 years.

On top of the mind-blowing numbers, Rivera has put together a pretty impressive list of accomplishments for himself over the past decade. Observe.
In addition to that, Rivera has racked up dozens upon dozens of MLB, AL, and Yankee pitching records, which can be found here.  Famed former ESPN analyst (and shameless Red Sox fan) Peter Gammons called Rivera the "Cy Young of the last 15 years" after the Yankees won the 2009 World Series, something that cannot be ignored coming from someone as well respected as Gammons and something that, when you really break it down, can't be argued even against all the other great pitchers of this era.

But again, just like with Jeter, it is not the stats that set Rivera apart as a special player, it is his approach and dedication to the game and the way he carries himself on and off the field that truly defines him.  Rivera prepares for each outing exactly the same, whether it is in April, May, September, or a World Series-clinching game in early November.  His conditioning is second to none and teammates have raved constantly about how he is the best athlete on the team.  He is, by all accounts, a great person and a great teammate and is always willing to help mentor young pitchers.  Guys practically line up to talk to him at All-Star weekend like giddy kids getting autographs during batting practice.  His mental approach when he's on the mound is one of an assassin; he is calm, cool, and confident without ever appearing even remotely cocky, and his expression never changes while he's warming up, on the mound, or after he leaves the game regardless of the situation or how good or bad his outing goes.  And for the better part of the last 10 years he has done all this with one... fucking... pitch.

When other pitchers are always fooling with new grips and new pressure points to get different spin or action on the ball to improve their effectiveness, Mo toes the rubber every time knowing exactly what he's going to throw and where he's going to throw it.  Mo's approach is the equivalent of the scene in "The Sandlot" when Ham the catcher calls out "here it comes.  The heater.  I dare you..." to the opposing batter and the kid strikes out anyway.  Every batter knows what's coming and are still helpless against it.  Jorge has admitted that he doesn't even call pitched any more when Mo is on the mound, just location.  Mo has broken so many bats that all those "Save Mother Nature"-organizations should be looking at him as cause for the depletion of the world's forests, and he's broken so many spirits that Dr. Phil could hold shows dedicated to helping guys recover from facing Rivera and go 3 straight months without having to do a re-run.

Every Yankee fan gets chills every time they're at the stadium and the opening chords of "Enter Sandman" hit.  It's the single greatest entrance in sports for anybody; you can feel the electricity in the air when it plays and the bullpen doors open to show this image: 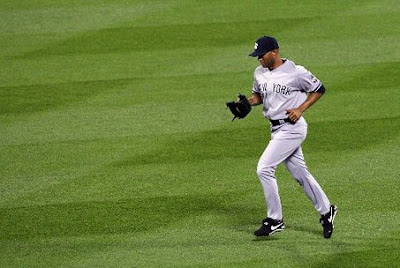 Mo calmly trots out, throws his last few warmup pitches and then proceeds to mow down whatever 3 poor saps are unlucky enough to be the next 3 up that inning.  Every network that shows a Yankee game should be required to stay on the air as Mo enters and not cut to commercial until he starts throwing his warmup pitches.  I still can't figure out why YES hasn't figured this out yet because it is truly one of the coolest moments in sports.  How many other guys can you say that about when you're talking about their entrance being just as amazing as watching them play?

Mariano Rivera is to closers what Michael Jordan is to basketball, what Wayne Gretzky is to hockey, and what Bret Hart is to wrestling: The best there is, the best there was, and the best there ever will be.  He said after the World Series this year that he wants to play for 5 more years and no Yankee fan alive would ever think that is a bad thing.  Mo has aged like the finest of fine wines over the last 10 years and shows no signs of slowing down as he moves into his 40s.

In establishing himself as the best Yankee pitcher over the last 10 years and the best closer ever, Mo has also proven one more thing; in life there are 3 certainties: death, taxes, and Mariano Rivera.