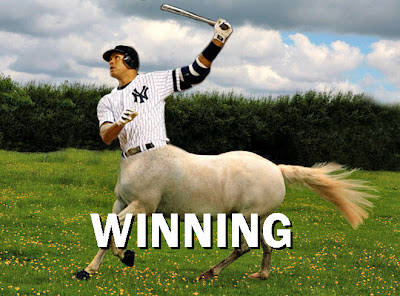 Posted by Unknown at 9:20 PM No comments: 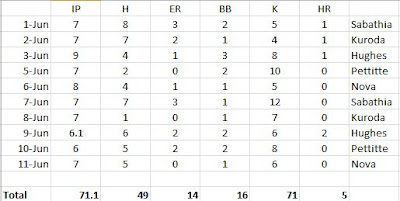 Do you see that?  Do you?  That's straight up DOMINANCE with a capital "dominance."  In the month of June, the Yankee rotation has posted the following line:

And that's with the ace of the staff not pitching his best.  If you're looking for the number 1 reason why the Yankees risen back to the top of the AL East, look no further than that spreadsheet.  They had their ups and downs early, but this crew looks like they're starting to settle in.  They aren't going to be this good for the rest of the season, but if they can pitch consistently well enough, that should be more than enough to win this division.  And if the offense ever catches up, watch out. 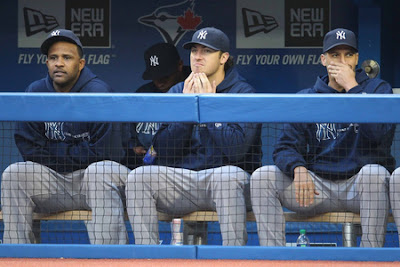 (See no evil, smell no evil, speak no evil?  Courtesy of US Presswire)﻿
Posted by Unknown at 4:22 PM No comments:

As awesome as Derek Jeter's scorching hot start to the season was, deep down we all knew it was going to come to an end eventually.  There were just too many factors playing against him for his low-1.000s OPS and low-.400s wOBA pace to hold up over the long haul, and eventually the law of averages was going to cause his tremendous BABIP luck to turn.  The numbers started to turn in May, when Jeter's OPS dropped to .692 and his wOBA to .314, and that downward trend has continued into the first third of June, where he's currently hitting .200/.289/.275 (.265 wOBA). The big shift in contact rates so far this month is a a red flag, bigger than the drop in batting line, and now the hope is that the production pendulum doesn't swing too far in the other direction and back towards the powerless GB machine that Jeter was a little more than a season ago. 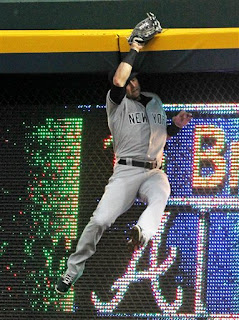