It was a struggle out there on the hill today for Ivan Nova, who struggled with his fastball and paid for it.

While it's no major cause for concern, as Nova knew that he couldn't get the ball down in the zone when he was interviewed after the game, it does point to what Nova is going to have to do this year to be successful.  His biggest strength is his ability to locate his fastball down in the zone and force a lot of groundballs.  If he can do that, he can be successful.  When he can't, he's going to get hit.

So while this doesn't extradite him from the rotation by any means, it does give us all a window into what is going to drive Nova's success or lack of this season.  And it also gives me an opportunity to bring back Nova the Terrible for the first time in 2011. 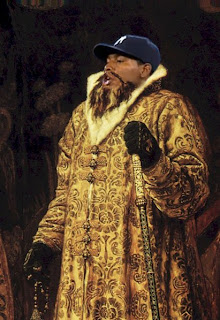 So I guess I have to take the bad with the good when Nova doesn't have his fastball command.
Posted by Unknown at 5:59 PM No comments: 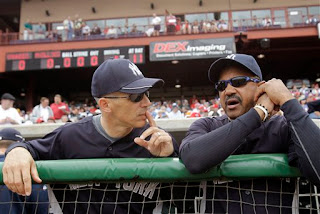 ("We're not letting Jorge catch, right?"  Courtesy of The AP)
Spring Training is in its 3rd week now, and already it looks like there are major changes in terms of front runners for some of the last roster spots based on performance over these first couple weeks.  Nothing is set in stone, of course, and there is still time for guys to get hot, get cold, or get hurt, and change the landscape some more.  Here's a quick look at how the favorites for some of these spots have changed over the last month.

Back of the Rotation

Not a major change for Nova, who still has to be considered a favorite to get a rotation spot after working 2 scoreless outings so far.  But Freddy Garcia has drawn praise from his 5 innings of ST work (deserved or not), mainly due to his improved fastball velocity and demeanor he has displayed on the mound, which has scouts saying he's got more than enough guile to handle pitching in the Bronx.  Garcia can't afford to let off the gas, however, as every other potential rotation candidate has also pitched well, and because he is still in camp on nothing more than a non-guaranteed MiL deal.

Mitre doesn't appear to be a rotation option anymore and has assumed the pole position in the race for long man out of the 'pen.

Despite saying over the winter that they had every intention of letting The Jesus come into camp this spring and win the job, the Yankees made the decision to bring in some more veteran experience and signed oft-injured Russell Martin to a team-friendly deal.  So far that seems to have worked out well, as Martin has held up physically behind the plate while still showcasing a solid all-around defensive game in his few outings, shown some pop in his bat, and even tested his knee by stealing a few bases.

Montero hasn't lit the world on fire with his bat yet, but has drawn praise from his coaches and pitchers for his improved receiving skills behind the plate, and has also helped to ease concerns about his ability to slow down the opponents' running game by throwing out a few runners.  Montero will, in all likelihood, end up starting the season on the 25-man because of Frankie' bad luck injury.  What the team decides to do with him once Cervelli is healthy again will be determined by how Montero adjusts to the Major League game.

The PeNunez infield combo was slated into the bench spots prior to ST starting mainly because they were the guys who had been there before.  But after the Yankees brought in Ronnie Belliard and Eric Chavez, the certainty to those spots decreased and Pena and Nunez have both had to earn their keep.  Nunez has shined with the bat so far, hitting .375/.400/.542 in 24 at-bats, while Pena has put up .190s across the board in 21 ABs.  You can't put a lot of weight into ST stats, but the fact that Nunez's bat is far superior to Pena's while his defense is serviceable should give him the leg up in the utility infielder race.

Chavez, who came in with low expectations after being ravaged by injuries the last few seasons, seems to have found the fountain of youth down in Tampa this spring, with 9 hits in 19 ABs and a couple walks.  He is still a huge health risk, but he looks good so far, and the fact that he is a veteran who fits the Yankee mold of patience at the plate and can still back up at third or first if needed gives him a clear cut advantage over the Penas, Brandon Lairds, and Jorge Vazquezs of the world.  As long as he doesn't get hurt, the last bench spot will be Chavez's without a doubt.

The rest of the roster is all but set in stone, so these will continue to be the hottest battles in camp.  Guys have a little less than 3 weeks before the start of the regular season.  It will be interesting to see how everything shakes out.
Posted by Unknown at 7:36 AM No comments: