Do people still make New Year's resolutions?  Is that still a thing?  I haven't made one in years, mainly because I know I'm not going to keep it much past the time in January where the days start hitting double digits, but it kinda sorta feels like resolutions across the board aren't the big deal they used to be.  Instead of making a real resolution, I decided to set the bar low for myself and make the commitment to not be such a piece of shit this year.  I think that's a worthy goal, no?  Try to take myself from Vernon Wells circa 2013 levels of production to Lyle Overbay levels.  Now onto the links!

- SJK of NoMaas correctly called out the New York MSM for not taking Randy Levine and his idiotic Cano steroid comments to task like they would have if A-Rod would have made them.

- Mike Axisa of RAB mused on Ichiro's potential role next season and how effective he'll be if that role is greatly reduced.

- Daniel Burch of The Greedy Pinstripes expressed his lack of concern about Masahiro Tanaka's high pitch count in Japan and urged everyone to consider the difference between the Japanese leagues and MLB when referencing that 113-pitch figure.

- SG of RLYW attempted to translate Tanaka's Japan performance to an MLB equivalent to establish a baseline for expectations.  They're just projections, but I'd take that kind of production from Tanaka.

- William Juliano of The Captain's Blog pointed out the real problem in the Yankee front office that Randy Levine's emails with A-Rod exposed, besides just Levine being a dope.

- On Wednesday, Jason Cohen of Pinstripe Alley riffed on the idea of the Yankees following the A's model and building a team of flyball hitters.

- Derek Albin of Pinstripe Pundits reviewed Brian Cashman's history of signing free agent starting pitchers to see where he's succeeded the most and where he's failed the most.  Some of those names bring back bad memories.

- On Thursday, Chad Jennings of LoHud rattled off his list of New Year's resolutions for the 2014 Yankees.

- On Friday, el duque of It Is High... discussed the possibility of Brett Gardner leaving via free agency this offseason and why it would make sense to trade him before that happens.

- EJ Fagan of IIATMS/TYA examined the decrease in scoring in the AL this past season and what the causes of that decrease could be.

For the first Friday Jam of 2014 I'm going back to Lo-Pan.  I played them early in 2013 when I first stumbled across their stuff and that year went pretty well, so it can't hurt to go back to them again for the start of 2014.  "Dragline" has such a great intro, almost good enough to be a good closer entrance song.  Enjoy. 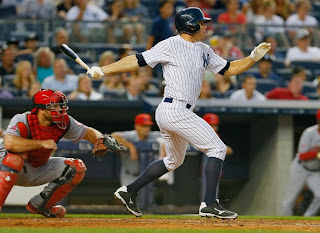 The Yankees have been steadfast in their public commitment to not trade Brett Gardner since they signed Carlos Beltran last month.  Before the speculation could even get going they stated they had no intention of trading Gardner and they've stuck to that, most notably when they turned down the Cincinnati Reds' offer of a Garder-for-Brandon Phillips swap.

The lack of willingness on New York's part to actively shop Gardner hasn't stopped other teams from calling, however.  According to a report by Peter Gammons yesterday, "at least a half-dozen teams" have contacted the Yankees to "take a run" at Gardner.  Included in that list of teams are the Phillies and Tigers, 2 clubs who could match up with the Yankees as trade partners depending on what they're willing to give up to get Gardner.  Gammons wrote that Cash is looking for starting pitching in return for Gardner and both Philly and Detroit have that to offer.