It went from high 70s in Wisconsin on Wednesday to mid-50s yesterday.  When I woke up this morning and left my apartment to head to work there was frost on my windshield.  Not just a little that comes off with a quick flick of the windshield wipers either, I'm talking a solid layer of frost worthy of a multiple-minute defrosting session.  I had to defrost my fucking windshield the day before Memorial Day weekend.  So glad I'm getting the hell out of this state for the weekend.  Now onto the links!

- On Monday, Martin Riggs of NoMaas checked Brett Gardner's swing/whiff trends against the fastball to see if it made sense as an explanation for his slow-ish start.

- Chris Mitchell of Pinstripe Pundits identified a few MiL hitters who are having good offensive seasons, since that seems to be the exception to the rule for most of the top positional prospects.

- On Tuesday, Dan Barbarisi of the WSJ had a cool profile piece on Travis Hafner and his unique gameday routine as a strict DH.  To me it actually sounds better than shagging flies.

- Chad Jennings of LoHud had Phil Hughes' thoughts on his recent struggles and problems with his fastball command.  Good to see Phil start to turn that around last time out.

- El duque of It Is High... lamented the eventual return of all the injured superstars and worried about how the team might be impacted if/when they get hurt again and the current guys aren't around to replace them.

- On Wednesday, SG of RLYW pointed out the Yankees' AL last place ranking in P/PA this season.  As something that's been a Yankee offensive staple forever, this is not good to see for a team this offensively weak.

- William Juliano of The Captain's Blog noticed a trend in strikeout rates and looked into whether it's the pitchers or hitters who are the leading cause.

- On Thursday, Mike Axisa of RAB looked back at the Yankees' 2008 draft and what could have been if they were able to sign their top pick.  This year's draft is only a few weeks away and Mike is easily the best source out there for pre-draft scouting reports on possible Yankee targets.

- Andrew Mearns of Pinstriped Bible commented on how high Mo has set the bar for future Yankee closers and how impossible it's going to be for D-Rob or anybody else to reach it.

- Andrew Ball of Beyond The Boxscore had a little fun with projections and looked at what kind of performance Mo would turn in if he was converted to a starter.

- On Friday, Daniel Burch of The Greedy Pinstripes broke down the 1996 and 2013 Yankee teams to see if the comparisons being made between the 2 are accurate.

This week's jam is "1Train" from the new A$ap Rocky album.  It features pretty much every new rapper worth a damn who's come out in the last year or so and they all pretty much lay down some fire with their respective verses.  Gimme this over 2 Chainz 25 hours a day, 8 days a week.

Enjoy your long weekends, everybody.
Posted by Unknown at 2:19 PM No comments:

With Curtis Granderson back in the lineup, looking healthy and relatively comfortable in the outfield, and showing signs of improvement at the plate, we can shift our focus to the next DL returnee to the lineup.  That next guy in line is Mark Teixeira, and based on the latest news about his comeback it sounds like he'll be back sooner rather than later.

Teix himself tweeted earlier this week about hitting in sim games and he's continued to play in those games and take live BP all week without any reported problems or lingering pain in his right wrist.  Yesterday, Erik Boland tweeted that Teix could start his official rehab assignment with Double-A Trenton as early as next Tuesday.

I would anticipate Teix spending more time than C-Grand did in his rehab assignment given the nature of his injury.  It's to both Teix's and the team's benefit to make sure there are no issues that crop up with the wrist from playing every day.  The big league club will be at home for a week straight starting next Wednesday before hitting the road for another West Coast trip.  That would give Teix a week of rehab games and if he's good to go maybe he joins the club on June 5th before they head to Seattle.  If he's not ready by then, I would bet the Yanks wait until mid-June when they're back from their road trip to activate him.
Posted by Unknown at 10:29 AM No comments: 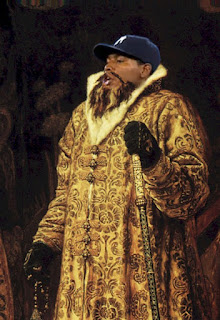