Does Anybody Know What's Up With Phil Hughes? 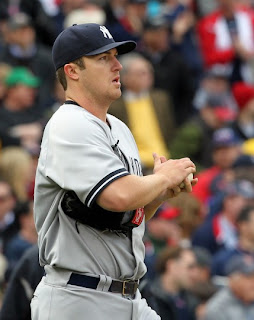 (The look of frustration and bewilderment.)
The lack of velocity and dreadful results are bad enough, but the continued lack of clear definition of what is wrong with Hughes and subsequent lack of direction that is being taken to remedy the situation is my bigger concern.

Over the last week or so since his bad first start, we've seen stories and reports on Hughes noticing mechanical flaws with his head position and arm swing compared to last season, then noticing more mechanical flaws with his his leg drive off the mound compared to last season, without either being confirmed as the actual problem and without any improved results to show as a result of trying to correct the flaws.  All the while, the organization continues to stand firm in their belief that Hughes doesn't need an MRI and there is nothing physically wrong with him.  For his part, Hughes believes that it is an arm strength issues and Larry Rothschild believes it is a mechanical issues, but the REAL issue here is the fact that nobody knows what the issue is and Hughes is starting to become concerned.

"It’s obviously something to be worried about.  This is my job, my livelihood and I don’t have the stuff I know I’m capable of going out there with. It’s worrisome and it’s frustrating." (Hughes via ESPNNY)

Worrisome and frustrating are not words you want to hear one of your top pitchers saying, ever, especially when it relates to his stuff.  That is basically Hughes admitting that he has no clue what is wrong with him and that the organization doesn't either.  And since nobody involved in this saga can come up with a clear plan for what needs to be done to address the problem, Hughes is just going to continue to go out on the mound with that worry and frustration in the back of his mind and hope for the best.  That strategy simply is not acceptable and not one that should be taken with a young pitcher who is such a vital part to the team's success.

All the parties involved in this issue (Hughes, Rothschild, Girardi, and Cash) need to sit down and hash out a plan to address Hughes' missing velocity.  If it means going out in the 'pen during his side sessions and getting a gun on him while he tries to correct the mechanical flaws, the fine.  That's a solid starting point.  But if that doesn't help, then medical solutions need to be looked at, be they MRIs, scopes, rest, whatever.  And Hughes' thoughts need to be factored into the plan.  He knows his body better than anyone and what he's feeling in his arm, be it strength or weakness, should be the leading determining factor in how they move forward/

To continue to guess at this, guess wrong, and have Hughes go out there on the mound without confidence in himself while everybody waits for him to magically regain the velocity is just plain stupid.  It's obvious that nobody knows what's wrong with him, and that's not necessarily the worst thing in the world.  The worst thing is to continue to hope for the best without having a plan in place for the worst, that being if the velocity doesn't come back.  The bottom line is, something needs to happen to get this issue resolved, and it needs to happen soon.
Posted by Unknown at 12:34 PM No comments: