Should A.J. Be Skipped? 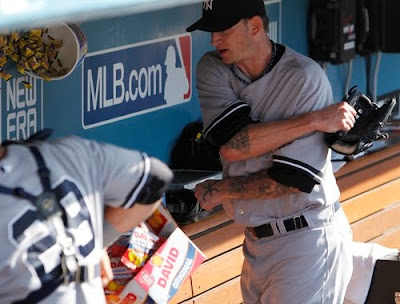 (Photo courtesy of Reuters)
As much money as A.J. Burnett is making, it seems completely out of the question to even suggest he be skipped before his next turn in the rotation.  But when you consider just how bad he has been in June, it actually doesn't seem like that bad of an idea.  Javy Vazquez started the year off throwing like a pile of wet dog shit and the entire Yankee world was up in arms, ready to stretch and quarter the dude in the middle of Times Square.  Javy's numbers in his first 5 starts:

No one would try to argue that those numbers aren't terrible.  They're embarrassingly terrible.  They're "worst kid on a Little League team" terrible.  And given Javy's track record at Yankee Stadium and the history that was still lingering in everybody's mind, Javy's included, it made perfect sense to skip over him and give him some time to work out his issues and build up his confidence.

Now A.J., surprising as it may seem, has been even worse than Javy's early numbers in his 5 June starts.  Read it and wheep:

Burnett's performance over his last 5 starts is worse than Javy's first 5 starts in every way imaginable.  He has given his team no chance to win, has been a huge burden on the still thin and still consistently inconsistent bullpen, and has gotten to the point where anybody with functioning eyes can clearly see Burnett quitting on the mound.  So why should he be kept in the rotation?  Why should the Yanks keep trotting him out there every fifth day at the expense of their chance for a victory and A.J.'s confidence and mental well-being?

The short answer to those questions is that he shouldn't, plain and simple.  There is no reason for A.J. Burnett to be in the rotation right now.  He's been fucking terrible and clearly is not doing anything on his own to change the situation.  With Dave Eiland returning to the team this week, it would be the perfect opportunity for A.J. to get some time away from the mound, watch some tape with Eiland on what he's been doing wrong, and have a few bullpen sessions to clear his head and get his mechanics back to where they need to be before heading out on the hill again.

There is only one problem that stands in the way of that solution.  The Yankees don't have anybody to pitch in Burnett's spot.  Sergio Mitre is still on the DL, as is Alfredo Aceves.  And Chad Gaudin has been working exclusively out of the bullpen and won't have the arm strength and stamina to go out and give the Yanks 4, 5, or 6 innings.  The team also doesn't seem to have any interest in bringing up the Ivan Nova's of the world for a spot start because if they were thinking that, they would have begun to adjust Nova's workload in Triple-A accordingly.

And even if the Yankees did have another option for a spot start for A.J., they more than likely wouldn't take it because they have Phil Hughes' innings limit to focus on.  They have already put the plan in place to limit Hughes now and around the All-Star break and so they cannot afford to change that plan to use him for an outing or 2 if A.J. were skipped, replacement or no replacement.  Hughes' long-term health is more important than A.J.'s right-now shittiness and that's the problem.

If Mitre were available, then I think we'd be singing a different tune.  In fact, I would be screaming that different tune and would have been for about a week now.  A.J. flat out sucks right now, and the bigger issue than that is that he knows he sucks and accepts that he sucks.  He isn't going to fix himself, so all we can do right now is wait for Eiland to get back in the clubhouse and hope he can work his magic on A.J. to get him back to where he needs to be.  And while that's going on, we also need to hope that A.J. doesn't go out and lay another egg while he's working on getting right.
Posted by Unknown at 12:59 PM No comments:

The Two Unlikeliest Heros Of All

If you would have asked me before last night's game which 2 players would have the biggest impact on a Yankee comeback win, I would have said Chad Huffman and Colin Curtis.  Of course, I'm a fucking genius, which explains my reasoning, but I'm willing to bet that not a lot of other people would have picked those 2 names.  But sure enough, it was those 2 who were the key cogs in the Yankee win last night.

After Cano got the comeback started with an RBI 2B in the 9th, Huffman, a mid-game replacement for Brett Gardner, hit a 2-RBI single to right to bring the Yanks within 1.  After that, Curtis completed an epic battle with Jon Broxton by hitting a grounder to first that was just slow enough to allow C-Grand to score from 3rd.  Bobinson rocked a 2-run bomb in the top of the 10th and the first 5 innings of shitty baseball were erased as the Yanks pulled out another series victory.

Andy wasn't particularly sharp last night, especially after his horrible fielding and throwing exhibition in the 3rd inning.  But his offense and bullpen picked him up and got him off the hook.  The Horse and Cano were a combined 4-10 with 2 HRs, 5 RBIs, and 5 R scored, and Mo went 2 innings to pick up the win.  Normally I don't like to see Mo used for multiple innings unless it's the postseason, but with Chan Ho Park and Boone Logan still out there in the 'pen in the 10th, I would have taken Mo throwing lefty and underhand over those 2.

For nostalgia's sake, I wonder how Torre felt sitting on the other side of a classic Yankee comeback last night.  He experienced so many of them from Girardi's seat that it must have felt a little strange being on the receiving side of a heartbreaker.  Oh well, I guess that's what you get when your closer only throws one pitch again and again.

The comeback win is good enough, but now you factor in the Rays continuing to blow up while teammates are screaming at each other in the dugout and the Red Sox players dropping like flies, it was a goddamn good weekend.
Posted by Unknown at 7:41 AM No comments: