The Young Guys Most Likely To Contribute In 2014 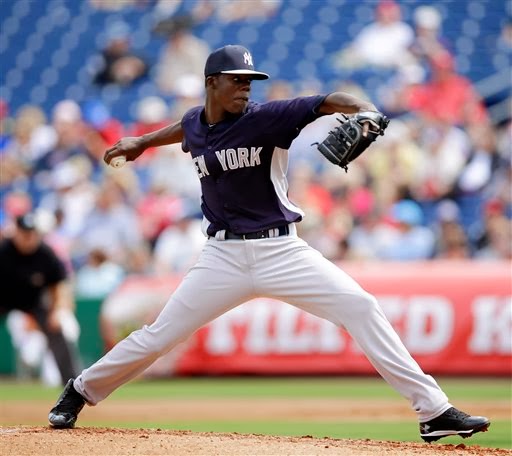 (Jose could be closer to the show than you think. Courtesy of the AP)

The time for the unveiling of the 2013-2014 AB4AR Top 30 draws nearer.  As part of the prelude to that and to AB4AR Prospect Week in general, I'd like to revisit a post topic from last offseason and take a look at some of the organization's top prospects who are serious candidates to make the jump and contribute at the Major League level in 2014.  The Yankees haven't gotten any younger in their free agent spending spree and don't appear to be making that a priority as they fill out the rest of their remaining roster holes.  We saw this past season how that approach with an old core worked out, and the constant barrage of injuries created many opportunities for upper-level MiLers to break into the lineup and attempt to carve out roles for themselves.

Last season's version of this post came in late December, so I'm a little behind schedule on this post in comparison.  I hit the nail on the head with my first 2 picks, then whiffed on the next 4 and missed out on guys like Adam Warren and Preston Claiborne.  After the jump, my picks for the prospects most likely to follow in the footsteps of Austin Romine and David Adams and work their way into Major League game action in 2014.

Are The Yankees Overvaluing Their Own Relief Pitchers?

Whatever the reason, be it the desire to wait for the A-Rod suspension verdict, Masahiro Tanaka taking top priority presently, a last gasp attempt to stay below the luxury tax threshold, or a combination of the 3, the slow pace with which the Yankees have gone about rebuilding their bullpen this offseason doesn't feel right to me.  For the most part, strong bullpens have been a staple of the last 15-20 years of Yankee teams.  The 2013 edition was hit or miss, burned by a group inability to keep the ball in the ballpark and a soft middle relief underbelly that took its share of beatings before some games could even get to D-Rob and Mo.  Mo is gone now, along with top lefty Boone Logan and Joba Chamberlain.  Chamberlain is a loss in man power only, and nobody needs to be reminded that a pitcher like Mo can't be replaced, but for a group that lost that many innings it seems like the Yanks would want to make an effort to replace more than just their LOOGY.

Ichiro For J.J. Putz? Maybe (But Probably Not)

I wouldn't go so far as to call it a rumor, but Ken Rosenthal mentioning Ichiro Suzuki as a potential return trade piece for Arizona reliever J.J. Putz at least made my ears prick up.  Rosenthal believes the D'backs might be looking to move Putz and his $7 million salary for 2014 after trading for Addison Reed and he brought Ichiro's name up as a player whose salary for this coming season matches that of Putz.

That close salary connection is really the only one there when it comes to a potential Putz-for-Ichiro trade though.  The D'backs are pretty well set in the outfield and would have little use for Ichiro's shrunken skill set.  Even if they are looking to move Putz's salary, they can do better than an old, spare part outfielder who doesn't hit for power and doesn't get on base.  For the Yankees, however, this would be an avenue worth traveling down if they're still interested in trading Ichiro (they should be) and interested in Putz as a reliever (they should be).

Right now it's nothing more than speculation, but pay attention to what happens with the D'backs and Putz in the next few days and weeks.  If they do put him out on the trade block, the Yankees should be in on him.