A.J. Burnett Is Starting To Really Piss Me Off 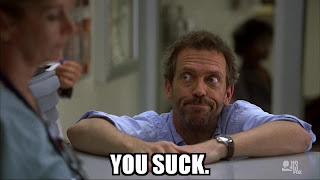 I didn't get a chance to comment on this because of my travel day last Thursday, but what the fuck was up with that stinker he dropped on the mound in Chicago on Wednesday night?  Dude was staked to a 12-run lead in less than 3 innings and he ended up not being able to finish enough of the game to qualify for the win.  That's not just bad, that's pathetic!  You could have put the ball on a tee and the White Sox probably could have gotten enough outs to qualify the tee for the victory.

Lost in the shuffle of the Yankees' recent success has been A.J.'s slow slide back to last season's levels of ineffectiveness.  He hasn't won a start since June, he's giving up home runs like it's going out of style, his ERA has gone from 3.93 in April to 4.06 in May to 4.15 in June to 4.83 in July and now 14.54 after his gong show of a start last week in August, totaling up to 4.54 (which ranks 86th out of the 106 ML pitchers who qualify).  His FIP has consistently sat anywhere from the low-to-high 4s range, with a craptastic 5.25 in July, and his current FIP (4.67) has him 94th out of 106.  And to top it all off, his BABIP against is a low .268, which means given some better luck for the hitters facing him all of these numbers could look even worse.

And the craziest part about all of this is, some of A.J.'s other stats suggest that he should be even better than he is this season.  His K/9 (7.76) is up almost a full strikeout higher than last season, and his BB/9 (3.97) is only slightly higher than his 2010 number.  His strand rate is better than 2010, his GB rate is better, his swinging strike % is up, he's given the Yankees 5+ innings each time out up until his last start, and yet his 4.67 FIP is only slightly lower than the 4.83 he put up last season.

It's to the point now where I have absolutely no confidence in A.J. to do anything but go out and pitch like shit each time he takes the hill in some fashion.  He throws 8 innings against Baltimore but gives up all XBH and loses.  He gets staked to a monster lead against the White Sox offense and proceeds to give up 13 hits.  Some days he walks the yard and can't command any of his pitches, some days he doesn't walk a batter and somehow still finds a way to lose!  No matter what happens, there's always a big pothole out there somewhere, waiting for him when he starts, and A.J. always manages to find the pothole, crash right into it, and completely wreck his shit.

If the playoffs were starting tomorrow, I would not have him in the rotation.  I would go CC, Bart, Freddy, and Ivan Nova.  I would do everything in my power to not have A.J. take the mound for any reason other than a garbage time appearance in a game the Yanks were losing.  It makes no sense to me, because for the first couple months he really looked better, but it's obvious that A.J. is what he is at this point, and what he is is a sucky starting pitcher.

(No high five for the bunt, Nuney.  Courtesy of Getty Images)
I'm not going to lie, that shot off of Beckett in the 5th last night was a thing of beauty.  1-0 cutter up in the zone and he absolutely crushed it.  It was a no-doubter practically from the time it left Beckett's hand.  It's exactly that type of swing and result that has made the Yankees believe the Nunez can be a productive everyday player, and since he was inserted into the everyday mix starting with Jeter's injury, he has more than held his own.  The kid is sitting .273/.325/.407 with a K rate under 10%, good for a respectable .330 wOBA.  He's shown the ability to recognize pitches and situations and work counts at the plate, and he obviously has more than enough pop in the stick to get the job done.

But in the field it's a different story, and last night in the 9th was another prime example.  For once, Nunez didn't botch a JV-caliber ground ball play, but his handling of Ellsbury's sac bunt attempt after the Scutaro leadoff double was atrocious.  Both Orel and the immortal Bobby V called it out, and I have to say I agree with them.  He was way too far in to start with and crept in even close when Mo let the pitch go.  It was a horrible bunt, one that was fielded easily by Mo (who is a tremendous athlete and would be a Gold Glove-winning pitcher if he started) but when he whirled towards 3rd to make Ellsbury pay for the bad bunt, Nunez wasn't there to cover the bag.  Instead he was standing right next to Mo.

Knowing the situation, Nunez should have stayed back, looking to cut down the runner at 3rd in the event of the bad bunt that they got, and let Mo handle the groundball.  Everybody in the ballpark knew that was coming, and between Mo and Martin, they could have handled even a good bunt to try to make a play and cut down Scutaro.  That's a situation where Chavez or A-Rod probably do the right thing and cover 3rd.  But Nunez being younger, dumber, and just plain bad in the field, didn't recognize the situation, and helped contribute to the eventual loss by allowing the Sawx to get exactly what they wanted out of a bunt execution that should have ended in Scutaro being out by a mile at 3rd.  And it's those continued types of errors in the field that are going to keep Nunez from ever becoming a stalwart in the everyday Yankee lineup.
Posted by Unknown at 12:30 PM No comments: