Report: Beltran Will Try To Play Through Elbow Injury (UPDATED)

Dr. Andrews must be raking it in on the Yankee account this year.  Carlos Beltran had his scheduled visit with the good doctor today to follow up on the bone spur in his right elbow that has him on the DL.  The visit and the revelation that Beltran had already received a 2nd cortisone injection in the elbow were bad signs that surgery, but it looks like Beltran is going to try to play through the injury first.

According to a report by Mark Feinsand, Dr. Andrews confirmed that Beltran has a bone spur in his right elbow (that's why they pay him the big bucks, folks), but apparently did not recommend immediate surgery.  Feinsand's anonymous source also says Beltran is going to try to play through the injury before turning to surgery and could come off the DL as soon as he's eligible if the elbow is feeling better.  If he's unable to play through the pain, surgery would put him out for 2 months.

In a way, this is better than immediate surgery.  The Yankees will get Beltran back in the lineup, for a short team at least, and maybe the cortisone injections will be enough for him to play with the injury and hit better than he has been.  That quick second injection really scares me though, and I think this could be a situation similar to CC's in which Beltran is just delaying the inevitable.

** UPDATE 5:09 PM- Via Bryan Hoch, Joe said Beltran will try swinging a bat on Monday to test the elbow.  If it doesn't feel good, he'll be shut down and undergo surgery. **
Posted by Unknown at 2:43 PM No comments:

(Almost none of those were hit hard.  Courtesy of Texas Leaguers)

The last time Masahiro Tanaka faced the Chicago Cubs was the first time he faced the Cubs.  It was his 3rd career Major League start and arguably his best one to date, even after his complete game shutout against the Mets last week.  He went 8 shutout innings on that day last month, allowing only a pair of infield singles with 1 walk and 10 strikeouts.

Tonight Tanaka makes his 9th career start and once again he'll be facing the Cubs.  This start will mark the first time that a team has gotten a second look at him, and with the way Tanaka has altered his approach from team to team and the way he worked against the Cubs on 4/16, it will be worth paying attention to how he changes things up this time. 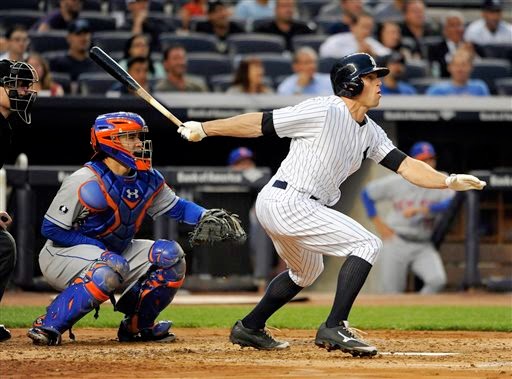 With the Major League rotation taking such a physical beating lately, the organizational pitching depth has really dried up.  That's made Manny Banuelos a more attractive potential option despite the fact that he's been pitching primarily in High-A ball this year on a strict innings/pitch count limit as he comes back from TJS.  That comeback hit its first real rough patch last night when ManBan was scratched from his scheduled Double-A start with arm problems.

As first reported by Nick Peruffo, Banuelos was scratched for Jairo Heredia after telling coaches about some soreness and fatigue he had been feeling in his left arm.  A possible DL trip was discussed initially, but Banuelos himself told Peruffo the issue was fatigue more than soreness.  This is pretty common with guys who are coming back from surgery and a lot of missed mound time.  It doesn't sound like anything is wrong with ManBan's surgically-repaired elbow, so the plan for now is to rest him for 3 days and have him play catch on Thursday to see how the arm feels.