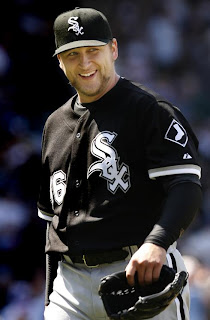 (Happy Mark Buehrle is happy.  Courtesy of The AP)
At this point, we've moved from the #2-type starters down to the #3s.  First up, Mark "Curl of The" Buehrle.

(A Mastodon reference and Chris Berman joke in the same sentence.  Score!)

- Durability, durability, durability.  Buehrle couldn't have put up that consistent level of production without being healthy.  He's never missed a significant amount of time due to injury, so his track record suggests that he would come with very low health-related risks despite the workload.

- His performance over these past 11 seasons has been above average.  Career 3.83 ERA, career 4.13 FIP, and 2 consecutive seasons of a FIP below 4.00.  He's also produced at least 3.4 WAR in all but one of his seasons.  The only Yankee starter to produce more than that last year was CC.

- Like Oswalt, Buehrle likes to work fast and throw strikes.  He generates a lot of swings and contact, but most of it is the weak type of contact he wants off of the cutter or changeup, his 2 best pitches.  Also like Oswalt, Buehrle has tremendous command.  His career BB/9 is just 2.05 and he's been at least 2.14 or lower in BB/9 every season since 2004.

- Dude can field his position like a boss.  3 straight Gold Gloves and the inspiration for the "Buehrle-Meter" on BBTN.

- Stuff-wise Buehrle isn't much.  His average fastball velocity in 2011 was just 85.6 MPH and it's trending downward as he gets into his 30s.  The value of his fastball dropped from slightly above average in 2010 to 12.5 runs below average this past season, suggesting poor future results for him on the pitch he uses to set up his 2 out pitches.

- Because of the soft fastball and the fact that he pitches to contact, Buehrle's K rates aren't very good.  Career K/9 is 5.07 but he hasn't had a season with a K/9 above 5.00 since 2008.  Bill James projects a slight rebound in that category for 2012, but fewer Ks means more balls in play, and that could mean more balls pulled through the left side against Jeter and The Horse.

- Although he isn't as old as Oswalt, but at 32 Buehrle is approaching the downside of his career.  And while he hasn't gotten hurt yet, all that mileage on his arm over the last 10 years could just mean he's ready to break down as he approaches his mid-30s.

- Recently Buerhle hasn't been very good at the beginning or the end of seasons.  It's admittedly a bit of a nitpick, but for a team that's always going to be in the playoff hunt, the Yankees can't afford to have starters bombing in September and October.

The Yankees could certainly do worse than adding Buehrle to the 2012 rotation.  He would be the 2nd lefty that they haven't had since Pettitte retired, which would be nice to break up the righties.  But at his age with his stuff, Buehrle does not fit the top-of-the-rotation mold that the Yankees are looking for.  Combined with Nova, he could provide a solid stable of #3-#4-type pitchers behind CC if Hughes and A.J. can bounce back in 2012, and he also won't command nearly the dollars or years that Wilson or Darvish will.  You know you're going to get innings and above-average production from Buehrle, but odds are he will be looked at as more of a contingency plan for the Yankees in case they don't get one of the higher-upside guys.
Posted by Unknown at 12:48 PM No comments:

Anybody Wanna Trade Brett Gardner? How About Russell Martin? Anybody?

Matt Imbrogno touched on this briefly yesterday, but there was one thing that Cash said the other day when speaking the media at the GM meetings that really stood out to me.  When asked if he had been engaged in trade talks with any other teams, Cash mentioned that teams had called asking about four specific players: Nick Swisher, Brett Gardner, Russell Martin, and A.J. Burnett.  While he didn't say who the teams were, or what, if any, players they were offering up as hypothetical return trade pieces, the fact that there are teams out there interested in those four guys got me thinking.  And the more I think about it, the more I think I could live with any or all of them being traded.

Swish was really no surprise to read about.  There had been all kinds of rumblings about whether or not the Yankees should and would pick up his 2012 option, and you can't come across many Yankee blogs that haven't included Swish as potential trade bait to bring in a pitcher.  For what he brings to the table, Swish would be a valuable addition to almost any team.  He gets on base, he hits for power, hits from both sides of the plate, plays a good outfield, and can even be a backup option at first base if needed.  And he's in the last year of a contract, so wherever he plays this coming season you know he's going to be motivated to perform at a high level so he can earn a big pay day.

Brett Gardner, on the other hand, was one of the names that I was surprised to read, even though I probably shouldn't have been.  With his speed and ability to make contact, Gardner would be an ideal leadoff candidate for plenty of teams out there.  You throw in the good defense and the team-friendly salary and you could probably start a discussion with Billy Beane about one of his young pitchers around Gardner.  As valuable as he's been the last 2 years, the reality is that Gardner is the Yankees' #9 hitter and won't be leading off for them until Derek Jeter finally does fall off the offensive cliff.  Would you really say no to trading the team's #9 hitter and a prospect or two for Gio Gonzalez if that would get it done?