When A Phony John Lackey TJS Story Breaks, I Must FJM 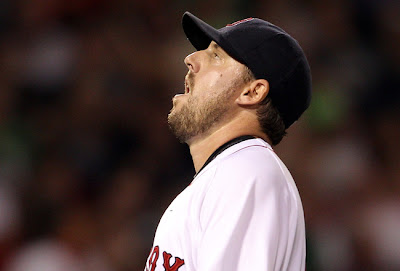 ("Oh I could use a beer.  And an excuse for why I was so horrible this year." Coutesy of Getty Images)
Oh, Ben Cherington.  You tricky, tricky little bitch.  I see what you tried to do here, and I appreciate the effort.  After all, if the pitcher my team signed to the same contract A.J. Burnett signed with the Yankees turned out to be a fat, lazy, dickhead piece of shit who put up numbers that made Burnett's look Cy Young-worthy by comparison, and I realized that I was now stuck with him and his awful contract for the next few years, I'd be trying to do something about that too.  But you have to wake up a little earlier in the morning to pull one over on old Brad-O.

Ahh yes.  Dr. Lewis Yocum.  I hear he does good work.  So good, in fact, that the team can only say that he's "probably" doing the surgery.  You know, because the Fraud Sawx want to shop around, get a few more quotes from some other noted orthopedists on Tommy John Surgery before making their final decision.

Of course.  Because it's not like you want to rush to get a guy's elbow ligament replaced when he's a professional starting pitcher.  Especially when the recovery time is typically 12-15 months and the sooner he got the surgery done, the more likely it would be that he'd be ready for the start of the 2013 season.

"Lackey had elbow soreness during the season and had an MRI in May or June, Cherington said."

Oh really?  And yet that was never mentioned at any point during the season while he was pitching like complete dogshit.  Which is weird, considering that almost any kind of elbow soreness in a pitcher is treated like a DEFCON 1 emergency by Major League baseball teams these days.  They must have done a follow up after the season, right?

"He had another one after the season and was examined recently by Yocum in Los Angeles."

Of course he did, and of course he was.  And thank God Dr. Yocum examined him that 4th time.  Because elbow issues that require Tommy John Surgery are SOOOOOOOOO hard to find.  It usually takes James Andrews what?  Like 6, 7 times to find the problem?

"John Lackey pitched through circumstances this year that I don't think any of us in this room can fully understand," Cherington said... "

"I mean, have YOU ever tried to pitch to Jose Bautista with runners on 1st and 3rd, yesterday's fried chicken tearing through your digestive system like Drano through a clogged sink, and a pretty serious buzz?"

"... and he got beat up for it a little bit along the way. This guy was dealing with some stuff both on the field and off the field that were really difficult."

"Yeah, sometimes the beers were tough to open.  And Beckett is really good at NHL 12, so it's tough to go into your next start after losing to him in an overtime shootout the day before.  And fans in Boston are so mean to you in the streets when you're rocking a 6.00+ ERA.  It's almost like they've been so spoiled by their recent success across all forms of professional sports that they think they're entitled to winning automatically."

"I thought he showed tremendous toughness pitching through that."

Because nothing says tough like throwing your arms up in exasperation every time your defense doesn't make a next-to-impossible play to bail your sorry ass out for not locating your 2-1 pitch in the right spot with the bases loaded while you've already given up 5 runs through 2.1 innings, and then making up a fake elbow issue after the season to conveniently provide an excuse for your entire shitty 6-month body of work.

"Late in the season, Lackey filed for divorce."

Oh, OK.  Well I guess that can be kind of a distraction.  I have friends that have gone through divorces and it can be tough.  Maybe I should cut the guy a little slack.

"His wife has breast cancer."

Wait, what?  Maybe I'm a little late to this party, but let me get this straight.  HE dumped his wife while SHE had breast cancer?  That was his "off the field" stuff that he was dealing with?  Kicking his wife, who he took an oath to stand by through sickness and in health, to the curb during what will surely be the most difficult and painful time in her life??  And I'm supposed to feel sorry for HIM????

"Fans and the media were critical of his pitching. But Cherington hopes Lackey can be a much improved pitcher in 2013."

Well he certainly can't be much worse.  Although I think it's probably more important for him to become a better person first.  It's one thing to completely suck at your job and basically steal your exorbitant paycheck from your employer.  It's another to completely abandon your wife while she's battling breast cancer and then have your new GM step in and try to use that as an excuse for your piss poor performance in 2011 at his introductory press conference while at the same time concocting what is most likely a phony tale of elbow issues that also contributed to the aforementioned piss poor performance.  Shame on you, Ben Cherington, and shame on you, John Lackey.  I didn't think I could possibly hate you more than I already do, but you have proven me wrong yet again.

Not only are you a shitty pitcher, dude, you're also a shitty person.  Shittier than me.  And I really hope this fake fucking surgery you have for your non-existent elbow problem goes horribly wrong and Dr. Yocum has to amputate the arm.  See how easy it is to open your rally beers and play Halo with Lester in the locker room with one fucking arm, dick.

And Cherington?  Not a good way to start your new regime as GM.  Covering for a guy who ditched his cancer-stricken wife.  Have fun sleeping at night with that on your conscience.
Posted by Unknown at 7:59 PM No comments:

Because I would have FUCKING LOST IT.

Seriously, I wouldn't even be able to write about it today because I would either still be in jail for completely trashing my apartment in a drunken rage to the point that my neighbors called the police because they were afraid there was a domestic violence incident taking place in my living room, or I would be fucking dead.  Dead from my brain exploding as I tried to make sense of what I just saw.  By now, everybody who reads AB4AR on a daily basis should know that I'm not a fan of Joe's bullpen management, and this would have sent me over the edge.

I hate to even talk about a World Series that the Yankees aren't playing in, but that was just fucking brutal last night.  Really, dude?  The phone wasn't working?  It was too loud in the stadium?  The bullpen coach thought you said "Lynn" instead of "Motte?"  Who the fuck confuses "Lynn" for "Motte???"  A blindfolded Marlee Matlin wouldn't confuse "Lynn" for "Motte."

And then you throw in the intentional walks and having the lefty face Mike Napoli and you're probably looking at the biggest managerial fuck up in baseball history.  I'm just glad that I didn't have to watch it play out with Girardi in LaRussa's place and even more glad I didn't have to listen to Tim McCarver's commentary on it.

(Hilarious LaRussa gif via SBNation)
Posted by Unknown at 12:41 PM No comments:

"The Phillies have declined the 2012 options for pitchers  Roy Oswalt and Brad Lidge.

Hmmmm, a 3-time All Star pitcher and former Cy Young candidate with a 3.21/3.35/3.58 career ERA/FIP/xFIP tripleslash who could be available at a reasonable price for a short-term deal?

The Yankees would have to overcome Oswalt's reported desire to stay in the NL, but I'd be willing to take a chance on him and his back for a year or 2 over offering more years to Mark Buehrle or Edwin Jackson.
Posted by Unknown at 8:32 AM No comments: