I've kept pretty quiet on the Rangers since the NHL playoffs started, mainly because I admittedly didn't have a whole lot of faith in them heading in and would not have been surprised if they lost to Philly in the opening round.  They didn't do that and they didn't crumble and fall after going down 3-1 to Pittsburgh, and now they find themselves 4 wins away from the Cup finals.  Having watched them more regularly in the postseason than I did in the regular, I'm much happier with the Canadiens matchup instead of the Bruins.  Montreal plays a similar style and I think the Rangers are a tick more talented, which should give them the on-ice advantage.  Nash and Stepan are due to wake up offensively to help the Brassard-Zuke-Pouliot line and that needs to happen this series.  Official AB4AR prediction: Rangers in 6.  Now onto the links!

- On Monday, Chris Mitchell of Pinstripe Pundits looked at how Brian McCann has battled hitting against the shift to gauge the level of concern we should have about McCann's sad offensive numbers.

- On Tuesday, Matt Bove of IIATMS/TYA asked if the Yankees have become too old again thanks to the combination of roster construction and recent injuries.

Mike Axisa of RAB discussed the decrease in usage of David Robertson as a result of his change in role and hinted at the potential for future bullpen problems if Joe continues to limit D-Rob.

- On Wednesday, Chad Jennings of LoHud got Joe's thoughts on the team's 4-game losing streak and recent injury problems, before they headed to Citi Field and halted the skid.

- On Thursday, Greg Corcoran of Bronx Baseball Daily ran through his list of who's been hot in the Minors over the first 6 weeks.

- SG of RLYW examined the statistical legitimacy to Yangervis Solarte's production through the a comparison to his projected wOBA variances.

- On Friday, el duque of It Is High... uncharacteristically searched for some glimmers of hope in the current injury-plagued mess that is the Yankee roster.

- Daniel Burch of The Greedy Pinstripes pointed out some troubling parallels between last season and this season.

Going with a little Maiden for this Friday's jam because why not?

Tonight's Game Postponed, Will Be Made Up In A Doubleheader On Sunday (UPDATED)

Tonight's Yankees vs. Pirates game is postponed. It will be made up as the second game of a single-admission doubleheader on Sunday (5/18).
— Yankees PR Dept. (@YankeesPR) May 16, 2014

This seems like it's happening way too much.  Once again Mother Nature is being non-cooperative and so the Yankees have decide to postpone tonight's game.  It will be made up as part of a doubleheader on Sunday.

No word yet on what either team will do with their rotation.  The Yanks had David Phelps set for tonight and Hiroki Kuroda tomorrow.  I would think there'd be no problem in pushing each guy back a day considering Phelps isn't completely stretched out as a starter and Kuroda is old, but we'll see.  I'm sure the extra day of rest will come in handy for guys like Jeter and Teix.

** UPDATE 5:38 PM- Team has confirmed that Phelps will pitch tomorrow and Kuroda on Sunday.  No word yet on who from he and Nuno will pitch the first game. **

Posted by Unknown at 1:26 PM No comments:

Get a gander at that right there.  That's Dellin Betances' pitch location plot from last night.  In case you missed it and somehow started reading this post before any kind of game recap, Betances was brought in with 2 on and 2 out in the bottom of the 5th inning.  He got a groundball out to finish that inning and then proceeded to strike out the next 6 batters he faced in order to get through the 7th.  It was downright murderous. 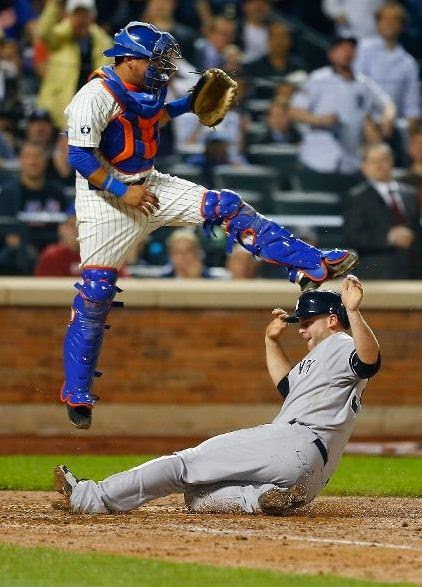