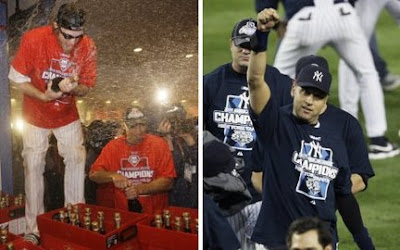 There has been nothing but constant talk since Sunday night about how well the Phillies match up against the Yankees and how they might even be better than the Yanks. When it comes from John Kruk saying it, nobody can get too upset; Kruk saying he thinks the Phillies are going to win the World Series is about as shocking as Michele Obama saying she was rooting for Barack to win the election last fall. But when guys like Joel Sherman start suggesting that the Phillies lineup is better than the Yankees, that's where I draw the line. Nothing like a little statistical analysis to end this madness and prove the Yankees are head and shoulders above their supposed "competition."

Offensively, the teams appear even across the board in terms of lineup depth, power, and situational hitting. But one key factor getting overlooked is how each team hits lefties. The Yanks boast the formidable combo of CC and Pettitte while the Phils counter with Lee and Hamels, so how each team has fared against lefties should be a good indicator of success in the series. Here's how the 2 teams compare:

Clearly the Yankees are the better team when it comes to hitting left-handed pitching. The trend has been consistent throughout the regular and postseason and guys like Jeter, Cano, and Teix have abused lefties from Day 1 to Game 6 of the ALCS. But if that isn't convincing enough, try this on for size:

In a combined 66 at-bats so far this postseason, the combination of Jeter, A-Rod, Cano, Teix, and Melky has totaled 23 hits for a .348 average with 4 homers and 15 RBIs. A-Rod and Jeter have also worked 13 combined walks off of lefties just by themselves.

For the sake of comparison, the combo of Ryan Howard, Chase Utley, Jimmy Rollins, and Jayson Werth (otherwise known as the heart of the Phillies) is 6-35 off of lefties. Sure there are 2 homers and 7 RBIs built into that smaller sample size, but if you extrapolate that out to 70 at-bats, they still fall an RBI short of the Yankees' output and are hitting 177 points lower off of lefties in the playoffs.

When you factor in that CC and Pettitte have been all but shutdown-quality effective in the postseason and Cole Hamels has been every bit as bad as Cliff Lee has good, the trends and signs point to CC and Pettitte continuing their dominance against Philly while Lee and Hamels should get hit harder, give up more walks, and be less effective against the lefty-killing Yankee lineup. John Kruk can think what he wants to think, but the numbers don't lie.

Now as far as pitcher-batter histories, the key Yankee bats have had great success against what will be the Phillies' rotation. For his career against Lee, Hamels, Pedro, Joe Blanton, and closer Brad Lidge, A-Rod is 27-84 for a .321 average with 4 doubles, 6 homers, 17 RBIs, and 14 walks. The only pitcher he has not murdered is Hamels, who surprisingly enough he is 0-4 lifetime against with 4Ks, but in limited at-bats A-Rod has rocked Lee, Blanton, and Lidge. No doubt these guys are aware of that history, as are Girardi and Charlie Manuel. If these clowns are even thinking of pitching to A-Rod with how perfectly he's locked in right now, they aren't just flirting with disaster, they're jerking it off under the table at dinner.

And if there's anything that can get Teix out of his playoff half-slump, it's Philly pitching. During his short stint in the NL and over the course of his career in interleague play, Teixeira has dominated Lee, Blanton, and Hamels to the tune of .343, 6 HR, 5 2B, and 18 RBIs in just 67 at-bats. The fact that he hits right in front of A-Rod means they are both going to be protecting each other through their numbers.

The true key is going to be Jeter and Damon continuing to set the table as they did in the ALCS. If they can get at least one runner on, that almost forces Philly to try to pitch to Teix and A-Rod, which history shows they have gotten hammered in doing so, but if the Phils staff can navigate through Jeter-Damon sea, they can pitch the next 2 more carefully and try to avoid the Teix-riguez tidal wave. In case you were wondering, Jeter has been successful in his career against the Philly starters too so once again all signs point to the Yankee offense punishing the Philly pitching staff.

Speaking of pitching, everybody knows it's what wins championships and every Yankee fan knows it's what has killed them in the last few playoff series. This year has been a completely different story. The rotation has been ridiculously dominant, even with A.J. Burnett's ALCS Game 5 stinker thrown in. Here's how the numbers look so far:

The Phillies rotational breakdown, for sake of comparison, looks like this:

What you see there is the Philly rotation being good, but not as good as the Yankees. And their numbers are inflated even more than the Yankees by Cliff Lee's insane numbers in his 3 starts. Lee has been great, and Pedro was surprisingly dominant in his one start, but on the other side you have Blanton who had been marginal at best, and Hamels, who has been a complete disaster. Basically the Yankee staff has been more consistent and has allowed fewer runs and only one more hit in more innings of work with more strikeouts over the same number of games started. The Yankees rotation is better across the board, period.

What that tells you right there is the despite their "struggles," the Yankees still have the better-performing pen than the Phillies. 13 of the hits, 5 of the walks, and 5 of the 7 earned runs allowed have come from Hughes and Aceves alone, so without that you're looking at an overall shutdown staff. The Phils pen has racked up wins, but has done it in games where they had commanding leads against teams that were clearly inferior to the Yankees and could not take full advantage of their propensity for giving up walks. The Yankees have shown time and time again this postseason what they do to pitchers who give up leadoff walks and there will be no skating by for the Philly pen in this series because they won't have the benefit of 4, 5, 6, or 7 run leads like they had against the Dodgers.

Despite their high WHIP, the Yankee pen has consistently gotten itself out of trouble and gotten the job done in close games, something the Phillies pen has not shown they can do yet. Once again, all signs point to Yankee supremacy in this always-important department.

So there you have it, all the talk of Philly being equal to or greater than the Yankees squashed with a simple look at the stats. Everybody at FOX and ESPN can stop trying to hype this series up because it's going to end up being a carbon copy of the ALCS: A great team beating a very good one. 3 more bonus tidbits for Yankee fans or just logical people in general that speak to the Yankees chances looking good:

* Despite not having great numbers over a long history of facing the Phillies during his time in the AL East, nobody on the Phillies roster has owned A.J. Burnett, certainly not to the degree that A-Rod and Teix own the Philly rotation

* Jimmy Rollins and Shane Victorino were noticeably sore and banged up after the NLCS celebration was over. You haven't heard a peep about A-Rod's hip, Hideki's knees, Robertson's elbow, or Mo's groin at all so far this postseason.

* Accuscore simulations over 1,000 games resulted in the Yankees winning 66% of the time and the Phillies 34%, a roughly 2-1 ratio.

World Series Prediction: Yankees in 6 games, what would equate to a 2-1 win ratio.
Posted by Unknown at 4:21 PM No comments: