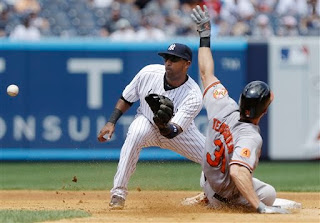 (Welcome back, Eddie.  Courtesy of the AP)

It was a day of shortstop returns today.  Derek Jeter was returning to game action in his first MiL rehab game in Triple-A, and Eduardo Nunez made his return from the Major League DL when he started at shortstop and batted 8th today.  He was back in support of Andy Pettitte, who was looking to keep the team's 5-game winning streak going and looking to add some consistency to his performance now that the rotation lost another arm in David Phelps earlier today.  If he could get it, Joe would have also liked some length from Andy and a healthy cushion late to rest some of his key relievers.  Neither of those things happened, but the Yanks still came out on the winning side.

- Tough start for Andy.  He gave up a 2-run HR to Chris Davis with 2 outs in the top of the 1st and then another on an Alex Casilla RBI double in the 2nd.  The fastball command wasn't there and Baltimore made him pay.

- The Yanks stayed in it thanks to 2 runs of their own in the 2nd.  Travis Hafner walked to lead the inning off and a string of singles and a sac fly made it a 3-2 game.

- The hit parade continued against Chris Tillman in the bottom of the 5th.  Another possibly ill-timed sac bunt (by Brett Gardner) was sandwiched between 4 singles to tie the game back up at 4.  But the rally stalled when Hafner went down looking and Zoilo Almonte grounded out.

- The Yanks had the chance to come back and tie the game, and then take the lead in the 6th on an Eduardo Nunez RBI single, because of how well Andy settled down after the 4th.  He gave up just 2 hits and no more runs into the 7th, and got a couple of big strikeouts of Davis and Markakis.

- Nunez's single was made possible by some effective smallball ahead of him.  Lyle Overbay singled and moved to second on a sac bunt by Luis Cruz.  I think they've been using the sac bunt way too much lately, but this time it worked.

- Tremendous job by the overworked bullpen to hold the lead and save the game. Shawn Kelly, David Robertson, and Mo combined for 2.1 IP of shutout ball with just 2 cheap hits and 4 strikeouts.

Remember To Take It Slow With Jeter

I've said this before.  I'm going to say it again now that Derek Jeter is returning to game action tonight for Triple-A SWB.  Don't get too excited about 1 game.  This needs to be a slow process in getting him all the way back and the Yankees have already been here before.  About 4 months ago, the Yankees and Jeter were in this same situation and all it took was 5 games - just the last 2 consecutively and only a few in the field - for Jeter to be shut down and eventually diagnosed with the re-break in his ankle.  That setback cost him 3 months of the season already and probably 4 when he finally is able to come back, and the Yankees can't afford to make that same mistake twice.

We know how the shortstop position has been one rotating cast of suck this season, and we know there wasn't any stability added to it by today's return of Eduardo Nunez because of another injury bug bite to Jayson Nix.  He's been placed on the DL with a Grade-2 hamstring strain, an injury that usually leaves guys out for at least a month.  But that can't be motivation enough to try to push Jeter back when that method has already failed once.

The Yankees need Derek Jeter back.  No question about that.  They also need a healthy Derek Jeter back, and the best way to ensure that is to take it slow with his MiL rehab and not over-do it trying to get him on the field ASAP.  It's great that he's back on a baseball field playing for real.  It'll be greater if he can stay on the field this time.

Give 'Em The Hook

That's just what Ivan Nova did to the Orioles last night.  He had his curveball working and he leaned on it big time on his way to a complete game victory that was arguably the best start of his career.  He threw 33 curveballs out of his 102 pitches, 15 of which were swung at and 9 that were swung at and missed.  As you can see above, Nova could locate it wherever he wanted.  He threw it down and away to righties to get them to chase and he threw it low and away and way down and way in to lefties, a sign that Nova was really feeling the command of the pitch last night.

Great fastball command (75.6% 4-seamer strikes) and a knockout swing-and-miss curveball.  Not a bad combo to have to shut down any lineup.  Nova had it last night and he might have forced his way back into the rotation discussion in the process. 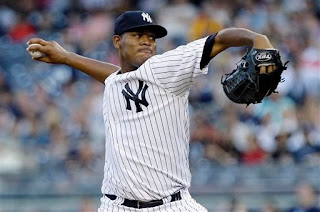