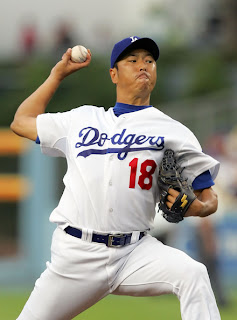 (Courtesy of Getty Images)
Another free agent pitcher the Yankees could pursue is former Dodger Hiroki Kuroda.  He's a name that's been mentioned before, but he can now officially be considered a potential target after the Dodgers signed Chris Capuano and spread some other money around elsewhere to fill their 2012 roster.  He's a longshot, so I'll spare the in-depth stuff and just go with some quick Pro/Con bullet points.

- Reliable: 180+ innings in each season he hasn't been hurt.

- Old and expensive.  Kuroda is 36 now and will be 37 at the start of the 2012 season.  And based of his recent contract, he's going to be looking for at least 2 years and at least $12 million per.  Not exactly the commitment the Yankees are looking to make.

- Trending the wrong way: His GB rate dropped significantly in 2011 to a career-low 43.2%, which lead to higher LD and FB rates and a career-high HR/FB rate.  Traditionally Kuroda has looked like a good match for Yankee Stadium, but 2011 casts some doubt on that.

- Preference: Kuroda has said all along that he wanted to stay in LA or as close as possible to Japan.  The Yanks would be fighting another uphill battle if they really wanted him.

Kuroda likely plays as a #3 starter at best in the Yankee rotation, so he's not an ideal candidate to give multiple years and 8 figures to.  He probably ranks somewhere around Edwin Jackson levels of interest as a last resort, and becomes even less likely for the Yankees to pursue given that they've already locked up Freddy Garcia to be their back-of-the-rotation older innings eater.  But hey, he's out there and it's Winter Meetings week so we might as well address the possibility.
Posted by Unknown at 11:47 AM No comments:

Noesi Killing It In Winter Ball

While the Hot Stove Season does a slow bubble and questions continue to surround the Yankees and their plans, assuming there are any more, to address the 2012 rotation, one man continues to fly under the radar as a possible rotation option.

That man is Hector Noesi, who after a few rough outings has really started to light it up in the Dominican Winter League, a league known for hitting.  Noesi recently won Player of the Month for November in the Liga de Beisbol Dominicano after going 3-1 with a 2.22 ERA and 17 K to just 6 BB over 28.1 IP.  For the season he has a 2.38 ERA and 2.70 FIP in 34.0 IP in the league with a 1.26 WHIP, just 7 total BB, and 0 HR allowed.  He's been on strict pitch counts as part of the effort to get him back up to a regular starter's workload, but he's shown improvement each time out.

Perhaps the biggest bit of news to come out his Winter League performance, however, is the report that Noesi has been sitting mid-90s on his fastball, sometimes touching 97-98.  Obviously this has to be taken with a small grain of salt, as there's no way to know how accurate the guns down there are. But if this is even remotely true, and Noesi has upped his velocity without sacrificing his calling card command (evidenced by the 7 BB), then the Yankees could be looking at Ivan Nova 2.0 in 2012 as I suggested in October.  One things for certain, as my colleague Eric Schultz at TYA put it, A.J. and Phil better watch their necks.
Posted by Unknown at 7:03 AM No comments: