Time Is Of The Essence With The Rotation

The latest in the Hiroki Kuroda sweepstakes is making the rounds on the blogosphere today, a report that Kuroda now prefers to play back in California to be closer to his children.  If that's true, then it takes the Yankees out of the driver's seat in the race to sign Kuroda, but like some of the previous reports on Hiroki this offseason the story cites friends close to him, hence my hesitancy to link to it.

Mike Axisa of RAB posted his quick take on these developments earlier today, and I agree with Mike on both of the key points.  One, the citing of anonymous friends brings into question the validity of the claim and it sounds more like Kuroda and his agent playing all angles to drive up his price for the teams interested.  If that's what they're doing, good for them.  Coming off the season he had, I'd be doing the exact same thing and that still puts the Yankees in the best position to land him.

Second, and more importantly, was Mike's statement that whatever the truth is, it's to the Yankees' benefit to have the Kuroda deal put to bed quickly one way or the other.  My list of free agent pitching targets didn't include many starters, for the simple reason that it's almost certain the Yankees aren't going to get involved in the bidding for guys like Zack Greinke and Anibal Sanchez, and they've already lost one potential 1-year backup option this week in Scott Baker.  If, that's IF, they lose out on Kuroda, they're going to have to scramble to find another starter willing to take a 1-year deal to build enough depth.  He's the key to their offseason rotation rebuilding, and the quicker they get that resolved the quicker they can move on to finishing the process and audibling if they need to.
Posted by Unknown at 1:42 PM No comments: 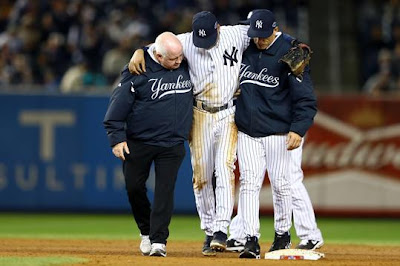